Perry: 'The Next Two Years Will Be About Hope and Revival' 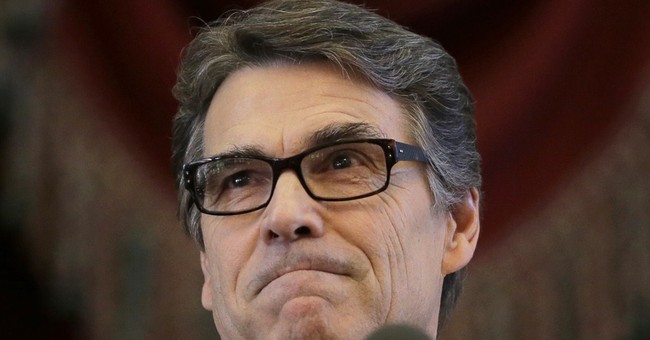 It’s been 18 days since Rick Perry left the governor’s mansion in Texas. Yet, that doesn’t mean he’s going to stop bragging about his state anytime soon.

Perry was introduced to a standing ovation at Thursday’s American Principles Project (APP) Gala in Washington, DC. In a speech filled with optimism and problem solving, he hinted that all America needed to get back on track was a lesson from the red state model and a new face in the White House.

“Earlier this week there was a liberal congressman from Florida who called Texans ‘crazy.’ He’s right, we are crazy! We’re crazy about jobs, we’re crazy about opportunity. And, we’re particularly crazy about the Second Amendment. What we’re not crazy about is a government that taxes too much, borrows too much, spends too much.”

He then got down to business, insisting that what America needs to fix these blemishes is a healthy dose of Texas.

“Americans face a very important choice about the future: Whether we’re going to continue to pursue the Washington model of reckless spending and job killing regulation and government that’s too big. Or, whether we’re going to choose the red state model, where taxes are low, regulations are reasonable, and opportunity is on the rise.”

“I think it’s time we started thinking bigger. I happen to know that we can unleash the growth and the opportunity and restore the American Dream for the middle class.”

How does he know it?

Perry has earned his right to boast. In his 14 years as governor, Texas created nearly one-third of all jobs created in America. In the last seven years alone, Texas created 1.4 million jobs. These results are largely thanks to Texas's competitive economic environment.

“Texas is where they find opportunity. We respect private enterprise, we respect work, which means government shouldn’t tax companies too much that they quit hiring people."

“Capital moves where it’s most welcome. And our formula for success is pretty simple: keep the taxes low, implement moral regulations, have an accountable public school system that in turn will develop a skilled work force and stop lawsuit abuse at the courthouse.”

Perry had another opportunity to brag about Texas when sharing how the Lone Star State has taken the lead on securing the border as the White House continuously fails to act.

“There have been so many attempts to come to this state of Texas, come to this country by any means, legal and illegal. Even more troubling than the economic mire though, are those children who come here from Central America unaccompanied by their parents. More troubling than that to me are these drug cartels and transnational gangs that exploit those individuals and threaten our citizens. Those who smuggle children, that enslave women, that destroy life by peddling their illegal drugs and weapons. They are the face of evil. And we have not stood idly by as that threat faced us in Texas. I deployed the Texas National Guard to the border to fight criminal activity and Texas has done more than any state in this nation to secure that border and the message is clear: As long as Washington fails to do its constitutional duty, to secure that border, Texas will.”

Perry didn't tame his rhetoric against President Obama and his cabinet when pivoting to foreign policy.

“Time and time again, this administration has chosen to abandon our friends and weaken our alliances. Take Israel. When peace talks between Israel and the Palestinians fell apart, did we stand with our greatest ally in the Middle East? No, there unnamed administration sources who were quoted attacking the Israeli prime minister and the secretary of state compared Israel to the apartheid regime in South Africa. That is not the America that I know. The America I know stands for freedom and stands steadfast with Israel.”

“Then there’s Iraq, there’s Syria. For more than 8 years, we sacrificed our blood and our treasure. We lost our best and our bravest in a difficult war, that continues to have consequences in the form of lives broken by battle. What they gave won the war in Iraq. We only needed leadership in Washington to secure the peace. But the president withdrew – he withdrew our troops. He left Iraq vulnerable to terrorism resurgence. Last year we saw that threat gathering strength in the form of ISIS.”

“What is required is not moral confusion, but moral clarity. It matters. It matters that we understand this for one reason: Without the confidence and the truth and the goodness in our own values, that great moral inheritance of our own culture, how are going to deal with the falsehood of theirs?”

“When we witness the brutality of this enemy in Paris, and again this week, with the Jordanian pilot’s incineration, what is needed at this time in history is a clear vision of the world, with America leading again and freedom on the march again.”

This progress, he insisted, starts with a change in leadership.

“It is vital that we elect leadership that rises above this partisan bickering, rises above the grandstanding and the gridlock, bring American together and heal the division in this nation.”

Some say Perry may be that leader. The former governor has certainly indicated he’s interested in running in 2016. This past week reports revealed that Perry has recruited over 80 major donors to his potential presidential campaign.

Perry's vision of America is one that would be refreshing to Americans who are tired of being inundated with headlines signaling the country's decline. In his remarks, Perry chose to focus on America’s strengths, such as our technological innovations like the iPad, and health advances such as those which saved Dr. Kent Brantly when he contracted Ebola on a mission trip to Africa.

“When I look at America, I see past our present decline, to a future of great promise.”

It is this kind of optimism that so defined President Ronald Reagan, who would have celebrated his 104th birthday on Friday. Reagan's positive assessment of America as a 'shining city on a hill' was a welcome contrast to President Jimmy Carter's vision of 'malaise' in America. It is this differing view of America that is one of the reasons why Reagan beat Carter handily in the 1980 election.

Perry ended his remarks at the APP Gala with the same kind of contagious positivity with which he began his speech.

“Today we must ask ourselves, if we remain a nation worthy of their sacrifice, if we learn the lessons of their generation, that evil must be confronted, that courage is the greatest weapon in the arsenal of free men and women, that America must always lead and is always to be free. Well, I have a quarrel or two with my government, but I do love my country. I’m proud to be an American. Proud to be a citizen of a country that stands for freedom, that defends freedom around the globe.”

“There is nothing wrong in America that can’t be fixed with a change in leadership. The next two years, are about hope and revival, about a vision to restore America’s place in the world. We must again be the voice of ideas, of opportunity, of optimism. And not merely just the voice of opposition.”