Yes, Cuomo Won, But Here's Why He Should Be Embarrassed 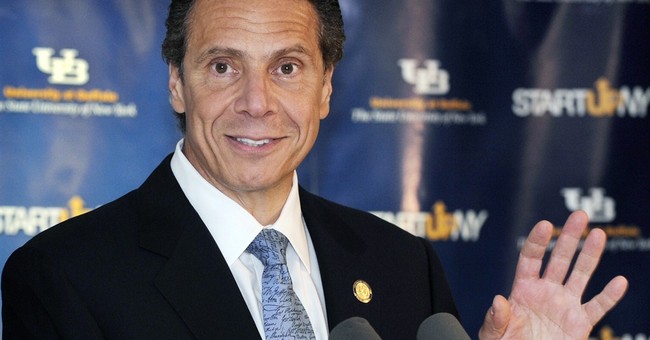 New York Governor Andrew Cuomo may have clinched the Democratic nomination, but he shouldn't plan any extended celebrations. An analysis of last night's primary results and a few incidents in the campaign leading up to them should leave him and his political team shaking their heads instead of clapping their hands.

Throughout the weeks leading up to the primary, Cuomo refused to debate, or even acknowledge, his Democratic challenger Zephyr Teachout. Teachout, a Fordham University professor who chose to run because she insisted her liberal credentials were more impressive than the governor's, fared better than many would expect against the incumbent. Here were just a couple takeaways from the polls that should concern the governor: (1) He barely cleared 60 percent, while Teachout won 35 percent of the vote. (2) He lost almost all of the Hudson Valley. (3) These outcomes leave him on the bottom rung of incumbents who have run for reelection in the last decade or so. These underwhelming results are underscored by the fact Teachout spent little in the race, while Cuomo's campaign spent millions on ads alone.

NPR reflected on what turned out to be a surprising night:

Cuomo was expected to win in a landslide against Teachout, who remained unknown to most voters, according to public opinion polls. But Teachout ran a spirited campaign, presenting herself as an outsider running against business as usual, getting endorsements from groups like the Sierra Club and the New York state chapter of the National Organization for Women. She also had support from wealthy activist Larry Lessig.

In summary, the outcome was a bit of an embarrassment, which can in part be explained by state Democrats' disapproval of the governor's often centrist policies. Or, perhaps the less-than-flattering results are because of his involvement in Morelandgate. My colleague Matt explains that scandal here.

But, what Governor Cuomo should be more ashamed of, is how he treated Teachout this summer. That is, as if she didn't exist. In addition to refusing to debate her, strangely referring to debates as a "disservice to democracy," Cuomo literally looked right past her at this weekend's during Labor Day parade in New York City. As far as I know, he has 20/20 vision, so there was no excuse for his immaturity and rudeness.

Yes, congratulations on your victory, Governor Cuomo. But shame on you on how you chose to earn it.