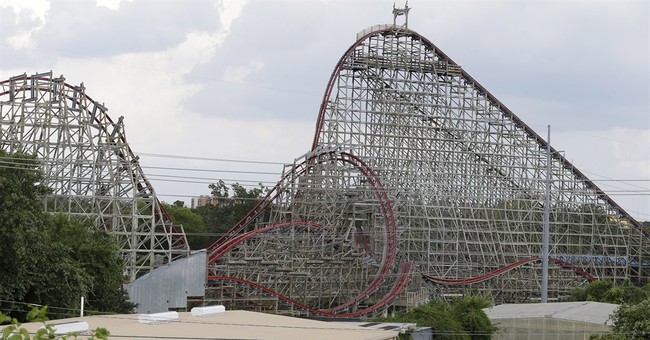 Corporal Mario Alejandro was a member of the Marines who took part in the initial invasion of Iraq in 2003. This patriot was recently kicked out of a Six Flags amusement park in Jackson Township, New Jersey. His crime? Wearing a shirt that read, “Keep Calm and Return Fire.” Thanks to his choice in apparel, he couldn’t even get past the front gate:

“I can’t let you into the park with that shirt on. That shirt’s offensive,” Alejandro recalled the guard saying to NJ.com. “I said it’s not offensive, it’s a military shirt. I told him that I am an Iraq veteran … I served in the war. But he said: ‘I don’t care, you have to take it off … or you need to buy another shirt to put over it.”

Alejandro, who could not be reached for comment Friday, refused to remove the T-shirt from The Reconnaissance Foundation, a nonprofit group supporting Marines and their relatives, or to buy another garment, leading the security guard to call a supervisor.

“I saw him talk to two women in white shirts, who looked at me and then shook their heads,” he told NJ.com. “And then the man grabbed my arm and asked me to leave. I told them that it’s not offensive, that it’s a military shirt and that it means nothing. But they said: ‘I don’t care, get out of the park.’”

The proceeds from Alejandro's shirt goes to military veterans. It was supposed to be a win-win: He could exercise his First Amendment right while supporting his fellow soldiers. No matter to Six Flags, it seems.

What exactly is offensive about promoting the Second Amendment and wearing our nation's colors? Unfortunately, this isn't an anomaly. Across the country Americans have been punished for sporting their right to bear arms.

The theme park tried to excuse away its action toward the veteran by noting its ‘longstanding relationship’ with U.S. veterans – such as its policy to offer discounts to veterans and events honoring them and their families.

Sorry, that's no excuse. Shame on Six Flags for humiliating one of our nation’s bravest.