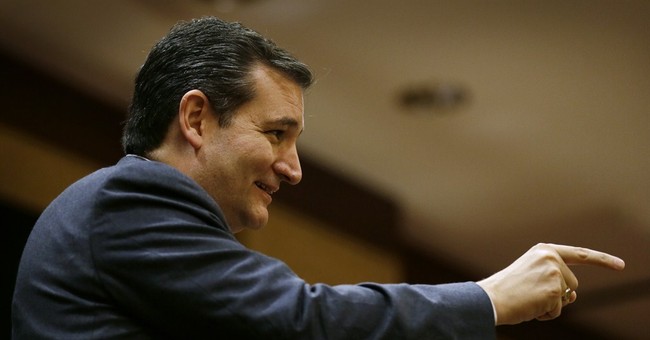 "There's one person happy with how Obama is doing - and that's Jimmy Carter."

Today at the National Conservative Student Conference in Washington, DC, Sen. Ted Cruz (R-TX) noted an intriguing parallel. America's high unemployment, troubled foreign policy and disenchantment with the president looks a whole lot like 1979 all over again - when President Jimmy Carter led the country into malaise. Fortunately, we had a conservative hero back then who was more than willing to step up and steer America back on course. Cruz believes we are about to experience this same reversal.

After recognizing the 50th anniversary of President Ronald Reagan's "A Time for Choosing" speech in 1964, Cruz made the case for why 2014 and 2016 will prove to be America's "second wave of freedom:"

"I'm optimistic," Cruz said. "I spend every day traveling the country. The same thing that happened in 1980 is happening today."

He offered the audience a few specific reasons as to why he can't stop smiling:

"It's going to be an incredible year. We're going to retake the Senate and we're going to fire Harry Reid! 2016 will be even better."

After Cruz's encouraging speech, about a quarter of the crowd raced to the mics to ask him a question. One student asked about foreign policy, and Cruz had the guts to say what President Obama won't in regards to Russia's encroaching powers:

"Mr. Putin, give back Crimea."

I share Cruz's hope that these next two elections will be a wake up call to politicians who seem more interested in voting uniformly than doing what's best for their constituents. How else can one explain why hardly any Democrats have challenged the Obama administration for its lawlessness?

We need more conservatives like Ted Cruz, who isn't afraid of saying what needs to be said. Unbeknownst to him, there were some murmurings in the crowd suggesting he himself could very well be in the White House in 2016.

Perhaps the best part of his speech, however, was his jab at the show "True Blood" at the very beginning. After summarizing an episode which featured vampires killing Texas Republicans at a Ted Cruz fundraiser (I kid you not), the senator had a simple message for HBO:

"I'm very disappointed to have lost the vampire vote. But I was astonished and amused that HBO was suggesting that hardcore leftists are bloodsucking fiends."