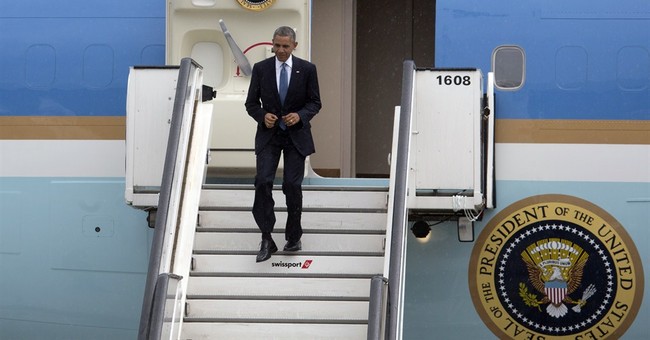 In his two presidential terms combined, President George W. Bush hosted a total of 318 fundraisers. Our current president, however, has already surpassed that number just two years into his second term. Most frustratingly, they often seem to come when we most need leadership from the commander-in-chief.

The turmoil between Israel and Hamas rages on and the downing of a Malaysian Airlines flight which took almost 300 lives has left nations in mourning. Yet, in the midst of these tragedies, Obama decided to attend another fundraiser. Five, actually:

Obama on Tuesday was starting a three-day West Coast trip, scheduled to attend at least five fundraising events in Seattle, San Francisco and Los Angeles less than four months ahead of midterm elections that could change Washington's balance of power.

A few highlights of his most recent money-raising trip include an overpriced dinner:

The event is at the Hunts Point home of former Costco CEO Jim Sinegal and his wife, Jan, according to a copy of the invitation obtained by The Seattle Times.

The price tag for the event is $25,000 per person, with proceeds going to the Senate Majority PAC, a Democratic group that accepts unlimited donations.

And, of course, a bit of schmoozing with Hollywood, such as Obama’s fundraising trip at the Beverly Hills home of Shonda Rhimes, the producer of the ABC series "Scandal." After he “briefly” touched on the unfolding crisis in the Middle East, the party went on:

The international concerns didn’t dampen donor enthusiasm, with about 450 people attending at ticket levels ranging from $1,000 per person up to $32,400 per person, the latter including dinner with the president, according to a DNC official. Millions were expected to be raised from Obama’s series of fundraising events over the last few days, as donors increasingly focus on the possibility that the Democrats may lose control of the Senate in November.

Hey, he at least took one stop off his trip:

Obama did abandon one idea for the trip, however. The White House had been in touch with late-night talk show host Jimmy Kimmel about a presidential appearance on his show during the stop in Los Angeles.

"We elected not to do it this time, but hope we can arrange to do it in the near future," Earnest said.

Probably when he wants to escape the next crisis.

It's a known fact that the president's fundraising trips are not as well timed as his jokes. Another case in point: The day after the Sept. 11, 2012 terrorist attack in Benghazi, Libya, Obama went to a fundraiser in Las Vegas.

Obama may not quite hit Clinton’s number, (the 42nd president held a whopping 638 fundraisers), but at this rate he’ll sure come close.

Can someone tell him we don’t hire the president to be an incessant fundraiser?