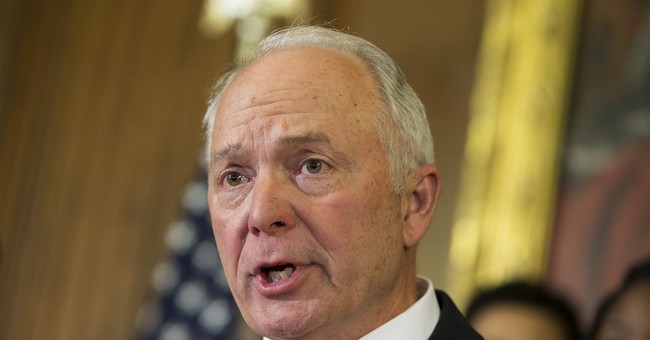 Editor's Note: This article originally appeared in the July issue of Townhall Magazine.

Rep. John Kline (R-MN) once had the responsibility of flying presidents to their destinations as a pilot for Marine One. Now, this aviator-turned-congressman is guiding constituents in a different capacity. He tells Townhall Magazine how he went from navigating the skies to drafting legislation:

While Kline was a student at Rice, the Navy had a program called Flight Indoctrination Program. It paid for him to go to a local flight school and get a local private pilot’s license.

“I did that and found out I liked to fly. So, it wasn’t too difficult to make the decision to go into the Marines once I was commissioned.”

His passion for aviation led him to join Marine Helicopter Squadron One, most known for being the home of Marine One.

“It was a great experience. I was one of about 50 pilots in that squadron. It was a great adventure. I got to travel to places in the world like Panama and Egypt, providing Marine One service for Jimmy Carter. It was a big responsibility, but really fun, flying with a lot of really good pilots.”

While he was in the squadron, he was head of an office called White House Liaison Office, working with the White House on providing Marine One wherever the president was needed and coordinating trips. He joined the squadron as captain and left it as a major. Soon, his credentials led him to another honorable post, working as a personal military aide to Presidents Carter and Reagan.

“It’s not something I expected to do when I completed my four years with Marine One. I thought it was time to get back to day-to-day flying, Marine Corps missions and living in tents and things like that, but it was suggested to me that the White House needed another military aide. ... The aide obviously travels with the president everywhere he goes, carrying the football. Jimmy Carter lost, Ronald Reagan won. Reagan’s transition team asked me to stay on. I stayed there until the summer of 1982 so I had the great honor.”

Kline considers it a breach of trust to reveal personal anecdotes about the First Family. One thing he was not coy about, however, was who he believes left the country in better shape.

“I think Reagan was the best president. Carter was very immersed in details, a very smart man, read a lot, knew the particulars of a lot of policy, but he didn’t have the ability President Reagan had to look ahead and keep the ship of state on the course. President Reagan knew what the long term goal was: it was to bring back a healthy economy, take on all the issues that had driven our economy into the tank, high inflation and all those things, and defeat the Evil Empire.”

Just like his dive into aviation, Kline’s advocacy for education was an unexpected but welcome career move. He ran for Congress, he says, out of concern for what was happening to the Armed Forces. He fulfilled that duty, becoming a member of the Armed Forces committee. But, he soon took on another role.

“I got to Congress and was put on the education committee. I got involved in a couple of big issues: pension protection act, modernizing system and became fairly knowledgeable about some issues. There was an opening to be the ranking member five years ago. I looked at the makeup of the committee and thought I could do a good job.”

His peers agreed, selecting him as ranking member, and then as chairman. In this role, he introduced the Success and Opportunity through Quality Charter Schools Act, a bill he is “very excited” about.

“We want to give parents more options, choices, so that their kids have a chance to succeed, in a climate where traditional public schools just aren’t doing the job,” Kline explains. “We want those good schools to be able to be replicated and to expand. That’s at the heart of what our bill does.”

Like Reagan, Kline may not like to accept credit, but for strengthening our military and providing families with better education options, he certainly deserves some. •