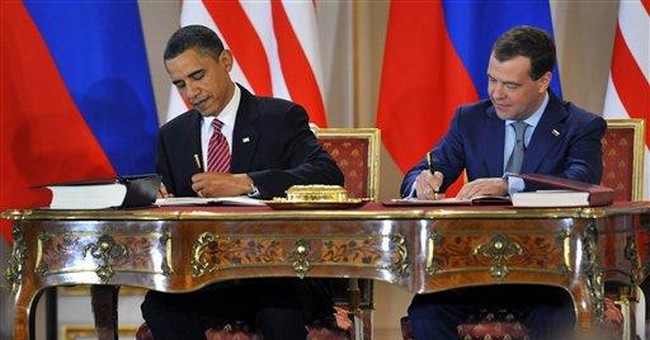 President Obama's new National Security Strategy identifies Russia as a "serious challenge to our national security," an abrupt change from Obama's 2010 assessment of Russia as a "partner" and "key center of influence."

"Now, at this pivotal moment, we continue to face serious challenges to our national security," Obama's 2015 National Security Strategy reads, "Violent extremism and an evolving terrorist threat raise a persistent risk of attacks on America and our allies. Escalating challenges to cybersecurity, aggression by Russia, the accelerating impacts of climate change, and the outbreak of infectious diseases all give rise to anxieties about global security."

Instead, in 2010, Obama considered Russia to be a "strong voice" in "the international arena." A country that, along with India and China, Obama was "working to build deeper and more effective partnerships with." That document also called Russia a "21st century center of influence" and trumpeted Obama's New START treaty with Russia, a treaty that Obama signed despite Russia's long history of violating arms control agreements. By contrast, while the 2015 document does mention the New START treaty, it strangely omits who the treaty is with.

In March 2012, at a conference in South Korea, Obama famously told then-Russian President Dmitry Medvedev that, "This is my last election. After my election, I have more flexibility." To which Medvedev then responded, "I understand. I will transmit this information to Vladimir."

Considering Russian President Vladimir Putin's subsequent belligerent behavior, including another Russian violation of the Intermediate-range Nuclear Forces Treaty, the annexation of Crimea, and the invasion of Ukraine, it does appear that Putin did get Obama's "flexibility" message.

Beth Baumann
It Looks We Know Why Pelosi Had That Meltdown on PBS Newshour in August. Her Intentions Were Exposed.
Matt Vespa
CARTOONS | AF Branco
View Cartoon
Most Popular