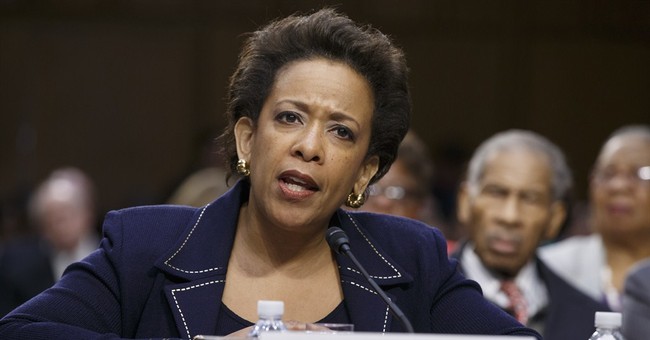 U.S. Attorney Loretta Lynch testified for just under three hours before the Senate Judiciary Committee Wednesday, but all any conservative needs to know about the confirmation hearing for President Obama's Attorney General nominee took place in just under ten seconds:

Sen. Jeff Sessions (R-AL): "I have to have a clear answer to this question: Ms. Lynch, do you believe the executive action announced by President Obama on November 20th is legal and Constitutional? Yes or no?"

Lynch: "As I’ve read the opinion, I do believe it is, Senator."

That's it. That's the ball game.

Lynch is now on record unquestionably defending Obama's unilateral executive amnesty. An executive action that Majority Leader Mitch McConnell (R-KY) said "is not how democracy is supposed to work" and that Speaker John Boehner (R-OH) said is a violation of the constitution.

This is not some insignificant matter for a minor government official. This is the chief law enforcement officer of the United States agreeing with Obama's position that the president can rewrite federal law at his whim under the guise of "prosecutorial discretion."

And under questioning from Sen. Ted Cruz (R-TX), Lynch could not even rule out applying that same "prosecutorial discretion" guise to the nation's tax laws.

Now that Lynch is on record endorsing Obama's view of executive power, any Republican that votes to confirm Lynch as Attorney General is also explicitly endorsing that view.

There is simply no way around it. A vote for Lynch is a vote for Obama's amnesty.

Republican Senators either believe that Obama's amnesty is an unprecedented violation of the Constitution's separation of powers, one that is worth using their own Constitutional powers to fight, or they will rubber stamp Lynch and sweep the issue under the rug.

Republican Senators should think long and hard before they cast their vote on Lynch, and not just because Republican primary voters will remember this vote.

If the Senate wants to continue to be relevant at all, they must push back against Obama's unprecedented expansion of executive power.

The Democratic Party believes they have a lock on the White House for at least a generation if not longer. They also believe that while they might be able to take back the Senate, the House is lost for the foreseeable future.

That means that the only way Democrats will be able to further their progressive agenda is unilaterally through the executive branch.

Obama's amnesty is just the beginning. If Republicans don't fight back now, Obama will walk over them for the next two years and Hillary may do so for even longer.