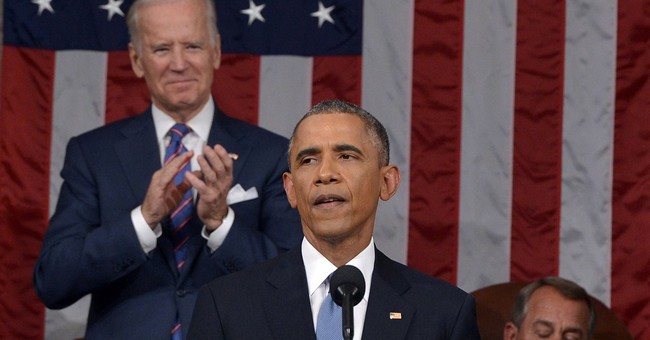 President Obama is either the most cynical man in Washington today, or the blindest.

That is the only conclusion one can reach after being subjected to his 2015 State of the Union Address.

"You know, just over a decade ago, I gave a speech in Boston where I said there wasn't a liberal America, or a conservative America," Obama recounted.

"Over the past six years, the pundits have pointed out more than once that my presidency hasn't delivered on this vision," Obama continued. "How ironic, they say, that our politics seems more divided than ever."

At this point, even a slightly more honest or self-aware politician would have acknowledged his own role in making politics more divisive. Not Obama. He proceeded straight to a lecture on what his opponents could do to make the country more united.

"Imagine if we broke out of these tired old patterns," Obama said. "A better politics is one where we debate without demonizing each other," Obama continued. "Where we talk issues, and values, and principles, and facts, rather than 'gotcha' moments, or trivial gaffes, or fake controversies that have nothing to do with people's daily lives."

All this from a man whose 2008 campaign held the record for spending on negative ads right up until his 2012 campaign broke it.

All this from a man who built his entire 2012 reelection campaign around demonizing and other-izing his opponent.

All this from a man whose staff pounced on every gaffe and "gotcha" moment and created fake controversies like it was their job.

If Obama wants to blame anyone for today's divisive politics he need only look in the mirror.

Instead of inviting Republicans in and letting them write the tax portion of his economic stimulus plan, he told them "elections have consequences," and showed them the door.

Instead of working with Republicans after 2010 to reform entitlements and taxes, Obama asked for the moon and got nothing.

Instead of acknowledging that the opposition party just won a historic victory at the polls two months ago, and identifying policy areas where they could compromise, Obama completely ignored November's elections, offered no congratulations to the new Republican controlled Senate, and instead punctuated a progressive activist agenda that has no shot of even being voted on by either chamber.

And that's fine. If Obama, and the Democratic party, want a permanently divided red and blue America, they'll get one.

If Democrats want to continue to block Keystone and then wonder why Republicans won't increase taxes to fund their infrastructure priorities, that's fine.

If Democrats want to offer tax plans that punish mothers outside the labor force and then wonder why Republicans won't pass their version tax reform, that's fine.

If Democrats want to insist on the federal government micromanaging our nation's K-12 and higher education institutions and then wonder why Republicans won't increase federal funding, that's fine.

States will take the lead. They already are. States are leading the way on infrastructure, on education, on criminal justice, etc. And Republicans control far more states than Democrats do.

If Obama and the Democrats want to use every ounce of the executive branch's power to force red states to try and act like blue states, that's fine.

The courts will hold them check. On health care, on immigration, on labor, etc.

And then the Americans people can vote with their feet. Then we'll really see which party is the true owner of "middle-class economics."

Will it be the inequality factories of California, New York, and Illinois, where poverty is rising as fast million dollar mansions?

Or will it be the red states that middle-class families are already fleeing to like Texas, Utah, and Florida?

Obama's presidency has solidified a new era of politics in Washington. Not one of hope and unity, but a politics of cynicism, animosity, and gridlock.

He seemed comfortable with that legacy Tuesday night. Conservatives just might be too.