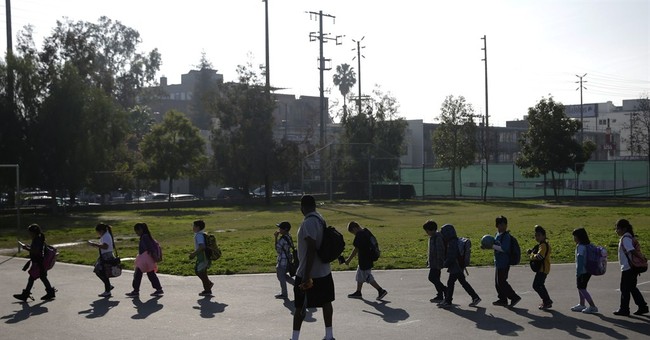 In his State of the Union address Tuesday, President Obama claimed his "Race to the Top" education program is responsible for raising test scores in public schools.

The only problem is, test scores have not risen any faster under Obama than they did under President Bush, but federal speeding on education has skyrocketed.

"Our younger students have earned the highest math and reading scores on record," Obama said Tuesday. And it is true, elementary and middle school math and reading scores were slightly better in 2013 (the latest year on record) then they were in 2012. But not by much. And the improvement during Obama's term has been no better or worse than during President Bush's.

In 2005, 4th graders scored 219 on reading and 238 on math. By 2009 those number had improved by two in reading and two math. And then in 2013 they improved again, buy by just one in math and two in reading. Eight graders saw similar slow but steady progress before and under Obama.

But schooling does not end in middle school. High school students get tested too. Wonder why Obama failed to mention?

Because in both reading and math high school students have shown zero progress under Obama after slight gains under Bush.

And all of this non-exeistant progress is costing tax payers billions. Federal spending on K-12 education has soared 43 since Obama became president, and that does not even include the tens of billions in stimulus dollars that produced zero academic results.