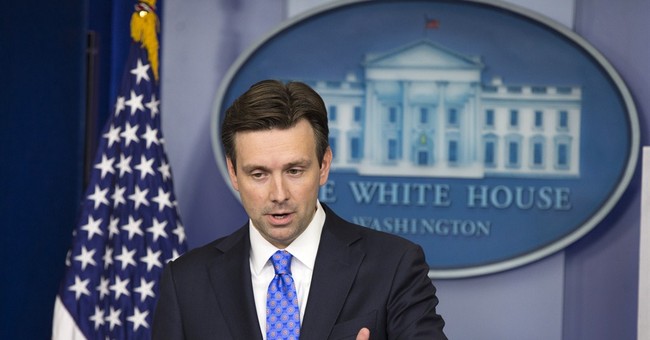 I do think that there is ample data to indicate that a lot of the policies that the President himself has advocated are strongly supported by those who participated in the election; that from support for a path to citizenship for immigrants who have been in this country for an extended period of time, to the President’s handling of things like Ebola or ISIL, that there’s strong support for what the President has pursued.
...
Now, these results are notable for a couple of reasons. One is, as you pointed out, that the electorate skewed Republican, that more Republicans showed up. But yet according to the findings of these exit polls, there is strong support for some of the priorities and policies that the President has carried out.

For the moment let's set aside Earnest's implication that Obama should only be accountable to Democratic electorates and that he has every right to ignore Republican ones.

Instead, let's look closer at his claim that Obama's plan to give illegal immigrants a "path to citizenship" found "strong support" in Tuesday's exit polls. Here is the actual question from the survey: "Most Illegal Immigrants Working in U.S. Should Be" either "Offered legal status" or "Deported?"

It is true that 57 percent of voters said "most" "working" illegal immigrants should be offered legal status, but look carefully for the word completely missing from the question... "citizenship. That is a kinda key component of Obama's "path to citizenship" policy.

The exit poll question also has other flaws that make it a inaccurate stand in for Obama's preferred immigration solutions. It says nothing about Obama's impending plan to grant millions of illegal immigrants, whether they are working or not, legal status through executive fiat. And, more importantly, it asserts a false choice between legal status and deportation.

As Obama's own former-Immigration and Customs Enforcement acting director John Sandweg told The Los Angeles Times, under Obama's current policies illegal immigrants living in the United States already face virtually no threat of deportation. "If you are a run-of-the-mill immigrant here illegally, your odds of getting deported are close to zero," Sandweg said, "It's just highly unlikely to happen."

So if illegal immigrants living in the United States already face a "close to zero" chance of being deported, then what would Obama's impending executive amnesty accomplish?

Well, if it is anything like his last executive amnesty, the Deferred Action for Childhood Arrivals program, it will give illegal immigrants work permits, Social Security numbers, and drivers licenses.

Well, it turns out that in the deep blue state of Oregon, which elected both a Democratic Senator and a Democratic Governor Tuesday, there was also a ballot initiative that would have allowed the state to give drivers licenses to illegal immigrants just like Obama wants to do by executive fiat.

And guess what? The overwhelmingly Democratic voters of Oregon rejected the initiative by a 66 percent to 34 percent landslide.

So if Obama goes through with his executive amnesty he will be directly overturning the will of Oregon's Democratically "skewed" electorate.

Not in Obama's America.

So, contra Earnest, to the extent that Obama's executive amnesty was on the ballot Tuesday, and it most certainly was in Democratic Oregon, it was soundly rejected.