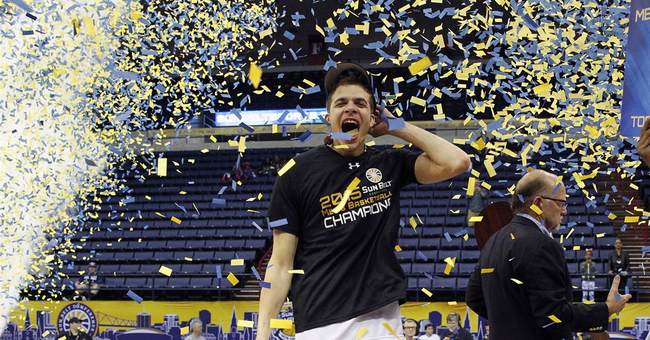 President Obama released his bracket picks yesterday on ESPN, following a tradition held since 2009. Obama picked the undefeated Kentucky Wildcats to beat Villanova in the finals, and he also picked Georgia State (a 14-seed) to fall to Baylor, who was seeded third in the West regional. Following Georgia State's insane victory over Baylor, Coach Ron Hunter had a few words to say to the president about his bracket picks:

(click the speaker to turn on the volume for the Vine)

Hey, Obama...I hope you make better decisions in that presidency than you did about Georgia State!

Hunter was not the only coach to poke fun at Obama's predictions for the tournament. Providence College Coach Ed Cooley (full disclosure: I graduated from PC in 2013) was not thrilled with the president's prediction that Dayton (an 11-seed) will upset the Friars. Cooley said that despite his admiration for the president, he should stick to politics, not basketball.

"Everybody has their opinions," Cooley said with a smile while meeting with some Rhode Island media Wednesday night at the team's hotel, "but I was just telling my team that nobody thinks we can win. If the President of the United States doesn't think you can win? I love Barack, I voted for him a couple times. I may take back a couple of my votes but he has to worry about foreign policy and our budget."

Congratulations to Georgia State for busting loads of brackets, and best of luck to the remaining teams in the 2015 NCAA tournament.