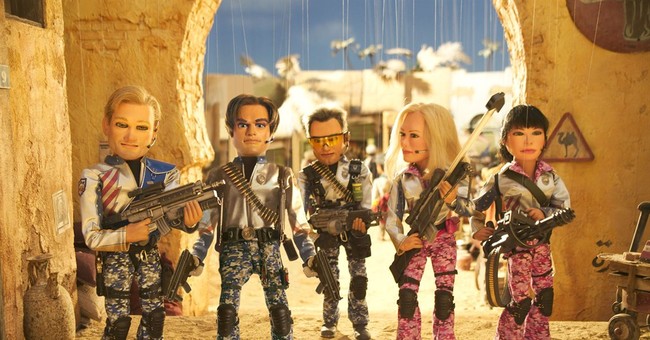 To borrow a line from the 2004 animated movie Team America: World Police, "Why is everyone so f***ing stupid?"

Following yesterday's cancellation of the movie The Interview because (supposed) North Korean hackers released a few old emails and lobbed threats of attacks on movie theaters that showed the movie (threats, by the way, the Department of Homeland Security says are entirely baseless), some theaters said that they would have free screenings of Team America: World Police instead. Both movies lampooned North Korean dictators.

However, referring back to the quote in the opening paragraph, apparently the United States can no longer have nice things and Paramount has banned screenings of the movie.

Due to to circumstances beyond our control, the TEAM AMERICA 12/27 screening has been cancelled. We apologize & will provide refunds today.

Three movie theaters say Paramount Pictures has ordered them not to show Team America: World Police one day after Sony Pictures pulled The Interview from release. The famous Alamo Drafthouse in Texas, Capitol Theater in Cleveland, and Plaza Atlanta in Atlanta said they would screen the movie instead of The Interview but Paramount has ordered them not to do so. (No reason was apparently given and Paramount hasn't spoken.)

This is an extreme and ridiculous act of cowardice. Hollywood shouldn't be afraid of North Korea, period, and film studios shouldn't be bowing down out of fear. There are plenty of controversial movies released that resulted in no protests, no attacks, and no deaths. Hey, here's six movies that involved North Korea that apparently didn't cross the line. This is all just madness.

I'll leave you with this NSFW ditty from Team America to serve as a reminder of how Hollywood once understood humor: [Strong language warning]