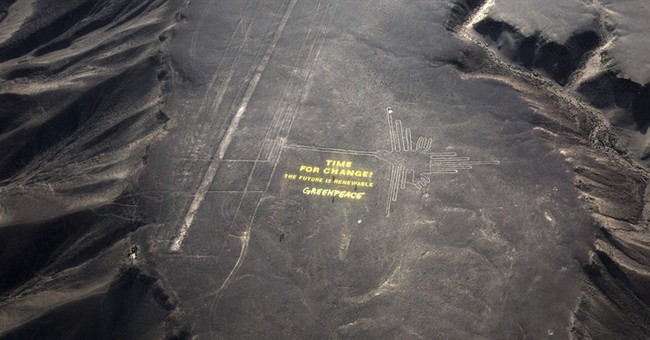 The environmental activist group Greenpeace has apologized after damaging the Nazca Lines, an ancient Peruvian site. The group placed a series of yellow banners very close to the hummingbird geoglyph spelling out a message calling for environmental awareness. In doing so, the members of the group trespassed on the area and disturbed the otherwise-pristine grounds around the lines with a series of footprints.

The area around the Nazca Lines is so protected that even the president of Peru cannot walk around there without express permission, and those who are permitted to enter the site have to wear specialized footwear to avoid damaging the ground. Greenpeace's activists, ironically, took no special effort to minimize their damage to the area

The message is practically on top of the hummingbird geoglyph, which is now surrounded by their footprints. And the irony is thick. The future may be renewable, but these fragile, ancient drawings are not.

"This has been done without any respect for our laws," Peru's deputy minister for culture Luis Jaime Castillo told the press, calling Greenpeace's actions "thoughtless, insensitive, illegal, irresponsible and absolutely pre-meditated." He explained further: "It was done in the middle of the night. They went ahead and stepped on our hummingbird, and looking at the pictures we can see there's very severe damage. Nobody can go on these lines without permission—not even the president of Peru!"

Greenpeace issued an apology on Friday, but the Peruvian government is now looking to press criminal charges against the group.

"The decision to engage in this activity shows a complete disregard for the culture of Peru and the importance of protecting sacred sites everywhere," Greenpeace U.S. Executive Director Annie Leonard said in a statement on the group's website Friday. "There is no apology sufficient enough to make up for this serious lack of judgment."

Obviously, this is unacceptable. There are appropriate venues to protest or to project a desire for environmental policy change. The Nazca Lines, clearly, are not an appropriate venue. The Peruvian government is right to be upset about Greenpeace's actions, and I hope this forces the group to take a smarter approach to protesting in the future.