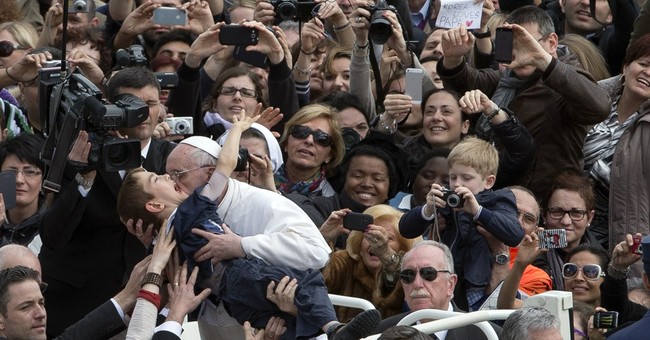 Since 1972, the United States Conference of Catholic Bishops (USCCB) has declared the first Sunday of October as the start of Respect Life Month, and today marked the kickoff of this year's celebration, and is themed around Pope Francis' 2013 statement that "Each of us is a masterpiece of God's creation."

Cardinal Sean O'Malley, O.F.M., chair of the USCCB, released a statement explaining why it is important to respect all life, and also why this year's theme was chosen:

We want to be part of a society that makes affirmation and protection of human rights its primary objective and its boast. Yet to women faced with an unexpected pregnancy, abortion is often presented as their only “choice.” A large percentage of children pre-diagnosed as having Down syndrome are never given the chance to live outside their mothers’ wombs. Elderly members of our families fear they will become burdensome and seek physician assisted suicide. We see these and many more of our brothers and sisters pushed to the periphery.

These tragedies go directly against respect for life, and they represent a direct threat to the entire culture of human rights. Rather than societies of “people living together,” our cities risk becoming societies of people who are marginalized, uprooted and oppressed.

What can be done to prevent this? We must draw close to Jesus in prayer and in the sacraments. We must ask the Lord for the grace to see ourselves and others as he sees us—as masterpieces of his creation. When God created each of us, he did so with precision and purpose, and he looks on each of us with love that cannot be outdone in intensity or tenderness. We must look at ourselves and at others in light of this truth and treat all people with the reverence and respect which is due.

It's important to raise awareness of why now, more than ever, life needs to be respected and how humans are indeed masterpieces in their own way. Nobody should be made to feel unwanted or useless. I especially appreciate how Cardinal O'Malley made a special note about how children prenatally diagnosed with Down syndrome are aborted at horrifically high rates--October, in addition to being Respect Life Month, is also Down Syndrome Awareness Month.