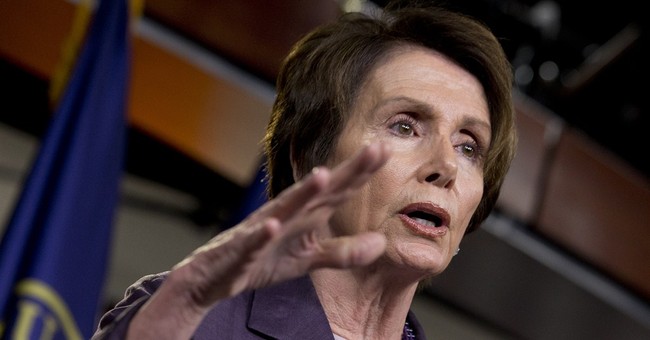 Self-proclaimed "devout" Catholic Nancy Pelosi (D-CA) has penned a letter to San Francisco Archbishop Salvatore Cordileone urging him to skip the March for Marriage on June 19 in Washington, D.C. Archbishop Cordileone is scheduled to be a featured speaker at the event.

House Minority Leader Nancy Pelosi took the lead this week in a high-profile lobbying effort to pressure San Francisco Archbishop Salvatore Cordileone not to attend the controversial March for Marriage event, which she characterized as "venom masquerading as virtue."

"We share our love of the Catholic faith and our city of San Francisco," Pelosi wrote to Cordileone, who, as head of the 560,000-member Archdiocese of San Francisco, has become the Catholic bishops' point man against gay marriage. She urged him to abandon an event in which some of the participants show "disdain and hate towards LGBT persons."

Pelosi also invoked Pope Francis' quote that he will not judge a gay person who is truly seeking to find the Lord and live a life of good will. Pelosi also seems to have conveniently forgotten that prior to his election as Bishop of Rome, Pope Francis was a leading critic of same-sex marriage in Argentina, referring to the practice as the work of the "Father of Lies."

The Catechism of the Catholic Church clearly states that those with "deep-seated homosexual tendencies" must be treated with respect, compassion, and sensitivity, just like any other person. This was what Pope Francis was referring to in his now-notorious "who am I to judge" quote. Additionally, the Catechism also states that "homosexual persons are called to chastity." Pope Francis has not changed Church doctrine on the issue of homosexuality, homosexuals, or gay marriage.

Furthermore, the Catholic Church considers marriage to be a sacrament between a baptized man and a baptized woman. A sacramental marriage is one that is "open to new life," which is the basis behind the Church's opposition to contraception and same-sex marriage, which by default cannot produce a new life. It has nothing to do with "venom" or "hate."

This isn't Pelosi's first time attempting to use her "Catholic faith" to legitimize her position on an issue that is contrary to Church teachings. In 2008 (and again in 2013) she tried to claim that Catholicism permitted abortion or that abortion was "sacred ground" due to her faith. More than 20 bishops spoke out against her to correct her statement.

I'm astounded by Pelosi's ego in thinking that she can instruct an archbishop on matters related to the faith. She has no right to tell an official in a religion she purports to follow how to act on matters that are in line with actual Church teaching.

Perhaps Pelosi should open a copy of the Catechism before she writes any more letters.