MSNBC Republican: Are Melania and Ivanka Trump ‘Dead Inside? Are They Paid Off?’ 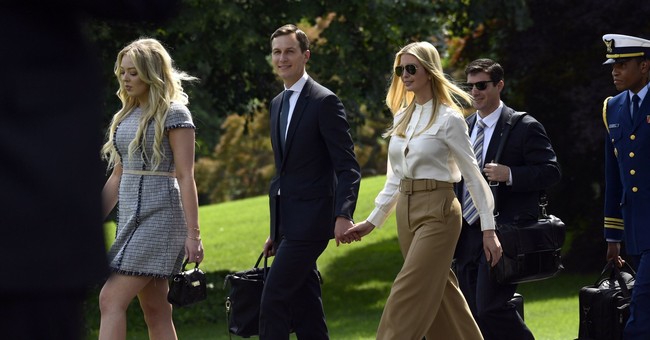 On Thursday’s “Deadline: White House,” MSNBC host and theoretical Republican Nicolle Wallace wondered aloud about how Melania and Ivanka Trump could possibly put up with the president’s “incredibly sexist, misogynistic views” day-to-day in the White House. Ultimately, Wallace suggested that the Trump women must be “dead inside” or “paid off” to maintain their support of him. The MSNBC host reached her tenuous conclusion together with guest panelist and Vanity Fairreporter Emily Jane Fox during a discussion about Rudy Giuliani’s recent comment that he does not respect Stormy Daniels because she “sells her body for sexual exploitation.”

Wallace and Fox began the segment in question by reacting to Giuliani’s comments and tying them in with President Trump’s purported hatred of women:

WALLACE: And I guess what struck me -- I will never play a moral policewoman here, but these are Donald Trump’s morals, because Donald Trump sought out Stormy Daniels for sex. So my reaction wasn’t, you know, wow -- it’s just, [Giuliani] represents a man who didn’t share his judgement that Stormy Daniels is worse than a criminal. He sought her out as a sexual partner.

FOX: Oh, he allegedly sought her out as a sexual partner, and I think…

FOX: Sure, but the President has incredibly sexist, misogynistic views about how he treats women in general. We’ve heard the way that he talks about women, calling them dogs and pigs, talking about grabbing them by their genitals. So he may not have shared these views about these specific women, but the way that the president talks about women and behaves towards women, it’s not so out of line with what Rudy Giuliani said. And what he said about Stormy Daniels was disgusting, it gave me a pit in my stomach from the second I woke up this morning. But, my first reaction was – this is so disrespectful to the First Lady.

At this point, Wallace jumped in and speculated about how it would be possible for Melania and Ivanka Trump to put up with both Giuliani and the president’s joint misogyny [emphasis mine]:

“Well, let me ask you, I mean -- you know more about the Trump women, the Trump family, than anyone. What do they do on a day like today?Are they just the most stoic human beings? Are they numb? Are they dead inside? Are they paid off? I mean, what’s their deal?”

Fox immediately responded in the affirmative to Wallace’s rhetorical questions about Melania and Ivanka before going on to accuse the Trump women of having a distorted and false image of the president [emphasis mine]:

FOX: Yes, yes, and yes, but I think they do not see President Trump the way that all of us see President Trump. They have such a distorted image of who he is that they don’t have the kind of reaction that we do.It’s almost some sort of trick…

WALLACE: [interrupting] But they’re mothers now. I mean, what kind of -- I mean, and they seem to be raising nice kids. I mean, what do -- how do they wall it off?

FOX: You are looking at this as a rational person, but I have written this a million times – Ivanka Trump is the most masterful compartmentalizer that America has maybe ever seen. And so her ability to separate something like this out from then going and sitting in the West Wing and doing her job or going and visiting her father in the Oval Office, she’s able to separate those things in a way that you and I probably can’t understand.

Indeed, I have doubts myself about whether liberal journos can truly understand Donald Trump better than his own close family members, but MSNBC might just have a magic crystal ball to plumb the depths of the president’s soul. The news network’s hosts certainly seem to think that they possess such an object, so you never know.

Feel free to check out the brief MSNBC segment for yourself at this link.