No More Raisin Snatching for Farmers 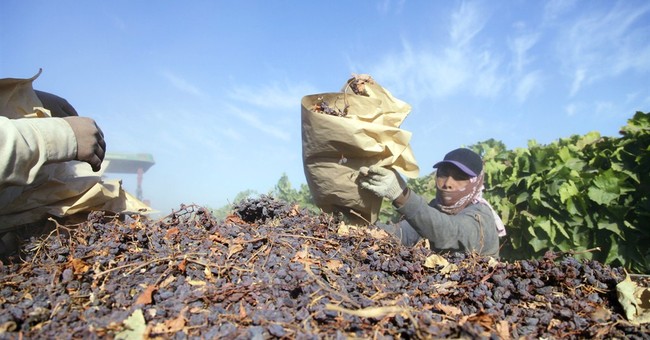 California farmers will fret no more after Monday's ruling that raisin farmers' produce will no longer be snatched by the government in order to keep a stable market.

In the 1930s Franklin Roosevelt's New Deal established the idea that the farm economy will pay growers to keep some of their crop off the market, or pay them to not grow at all to keep the economy steady.

Since then, conflict has been stirred on whether or not this a constitutional taking of property under the fifth amendment.

An incident in 2002 sparked this debate when a farmer refused to hand over his raisins for what the government called a "marketing order". A "marketing order" takes the raisins and places them in a national reserve, which keeps the demand of raisins high when prices decline-essentially stealing from the farmers leaving them unpaid for the reserved raisins.

In turn, these stubborn farmers refused to hand over the free raisins leaving them with a fine from the government of $480,000...plus an "addition" civil penalty of $200,000.

California farmers Marvin and Laura Horne brought this problem to flesh once again claiming that they were "losing money under a program they called outdated and ineffective," leaving them with $695,000 fine for trying to avoid handing over their raisins to the government. Monday's ruling finally put the Horne's problem to an end.

Initially, The government argued against the Hornes saying that they weren't forced to participate in the raisin-price support system, and also they suggested they could grow their own crops if they wanted to or turn their raisins into wine leaving Chief Justice John Roberts with a sly comeback stating, "let them sell wine is probably not much more comforting to the raisin growers than similar retorts have been to others throughout history."

Roberts writes for the majority claiming that raisins are private property and "the fruit of the growers' labor," not "public things subject to the absolute control of the state."

"The decision confirms what should be obvious: the government cannot come and take your personal property without compensation, whether raisins or other property, on the ground that the taking is for your own good," said J. David Breemer, attorney for the Pacific Law Foundation, a conservative group that backed the Hornes.

"It's just an affirmation in our Constitution and the American way of life," states Raisin Farmer Horne as he celebrates Monday's decision.

I don't know if I want to live in a country where farmers are allowed to decide how many raisins they grow. #SCOTUS