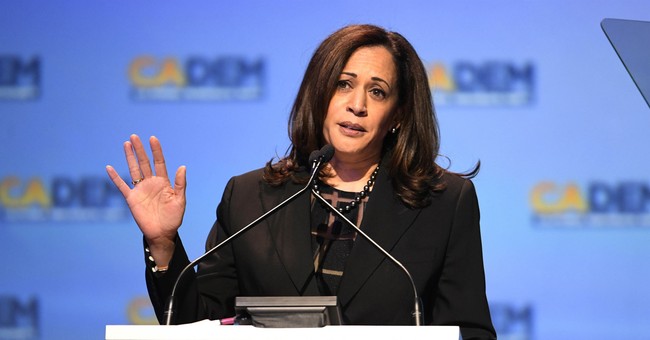 California's junior Senator, Kamala Harris (D), has quickly become a rising star in Democratic circles across the nation. People have continually whispered — and pondered — about Harris potentially running against President Donald Trump in 2020. Harris has remained quiet about a potential presidential run but she has made her legislative focus known: she wants to push gun control and roll back immigration laws.

“This administration, as far as I’m concerned, has put a target on California’s back and we’re going to need to fight this,” Harris said, referencing Trump's immigration policies.

Harris talked about the Department of Homeland Security separating children from their parents when they cross the border illegally.

“It’s immoral. And let’s be clear, government should be in the business of keeping families together not tearing them apart," Harris said.

During the discussion, the junior senator encouraged voters to be activists for causes they're passionate about, one of those being gun control. She explicitly talked about getting rid of "weapons of war."

“It’s a false choice to suggest you either support the Second Amendment or you want to take everyone’s guns away,” she said. “That is ridiculous.”

A Look At Her Past

One look at Harris' Twitter feed and it's apparent that pushing gun control and standing up for illegal aliens are her two top legislative priorities.

Here are some of her tweets about gun laws and gun control:

Awful, gut-wrenching news out of Santa Fe, TX. My thoughts are with the families of the victims. Grateful for law enforcement and first responders.

This is the 15th school shooting this year and we still haven’t taken action in Congress to address this epidemic. We cannot accept this as normal. We must address gun violence.

“It’s been happening everywhere. I’ve always felt like it would eventually happen here, too.”

We’ve lost too many children, classmates, friends, and family to gun violence. It’s devastating our communities. When do we say enough is enough and pass common-sense gun safety laws? pic.twitter.com/a6bun8E9uP

Each month, more than 50 American women are shot and killed by current or former intimate partners. As we demand our leaders finally take on this epidemic of mass shootings, we can’t ignore the connection between domestic abuse and gun violence. pic.twitter.com/ltFO5rvF63

No American should have to experience or live in fear of gun violence, especially children in their classrooms. Our leaders need to lead. We must stand up to the gun lobby and do what's right to keep our children safe from gun violence.

Since 2009, the United States has experienced 283 more school shootings than the total number of school shootings in Canada, France, Germany, Italy, Japan, and the United Kingdom — combined. For the sake of our kids, our country must do better. pic.twitter.com/uAC6SBjwiz

That our kids have to live in fear of gun violence in their neighborhoods, on their way to school, and even in their own classrooms is beyond tragic. It’s unacceptable. We must take action to end this epidemic of gun violence. pic.twitter.com/xLhSoO6Lyh

And what's taking place with immigration:

Dreamers are Americans in every way but on paper. These brave young people continue to demand fairness and justice from the only country they have ever known. It’s long past time for Congress to act. https://t.co/H1q2YzhAPE

After the widespread neglect and abuse being suffered by thousands in ICE detention facilities, the last thing we need is to build even more private prisons to hold them. Huge corporations should not be profiting off the detention of human beings. https://t.co/LxRdzJhO29

Let's be honest: this Administration doesn't want a solution for Dreamers. They want red meat for their base. They want to deny America's history as a nation of immigrants.

Dreamers should not be a bargaining chip used by this Administration to build a wasteful border wall using billions in taxpayer dollars. Period. https://t.co/UPFubnWTqT

By adding a citizenship question to the 2020 Census, this Administration is threatening the idea that everyone should be counted in America. It is a grave threat to the accuracy of the survey, which could impact communities across our country. https://t.co/J8GuHJY66M

This Administration's immigration policies are outrageous, cruel, and inhumane. Proactively working to break up immigrant families is putting these kids' lives in danger. We need to put a stop to this. Members of the Administration should come testify on this inhumane policy.

Dreamers are Americans in every way except on paper, but inaction in Congress continues to put their lives in danger. These brave young people deserve fairness and justice from the only country they have ever known. https://t.co/4sHYwVdf0C

Here are the facts on the Dreamer crisis:
?? Trump ended DACA.
?? The Administration sabotaged efforts to solve that crisis.
?? They don’t want a deal to protect the Dreamers. They want red meat for their base.

And if you still weren't sure where Harris stood on the issue of guns, her endorsement of major gun control advocate Lt. Gov. Gavin Newsom says it all:

Gavin Newsom has the courage to fight back against the Administration’s attacks on our state and our values. He’ll pick up where Governor Brown left off and always have our back. That’s why I was proud to campaign with him yesterday. Make sure you vote on Tuesday! pic.twitter.com/lPqEKqogoE

California doesn't exactly have the greatest reputation around the country. The Golden State is known for having high taxes, strict gun control laws, water shortages, high unemployment, an influx of illegal aliens and loads of traffic. Harris' attempt to push California even further to the left is setting the state up for even harsher conditions.

Californians are flocking to other states, like Arizona and Idaho, because they're wanting to have the freedom to choose how they live their lives (what a shocking concept, right?). But guess what? Harris wanting to push laws that reflect California's "values" is more of a liability than an asset. People are waking up to what the Golden State has become and they're done. California politicians like Harris are giving residents even more of a reason to flee the state. That fleeing is bad for the state of California but great news for the GOP. It means red states are going to gain Congressional seats while California loses them.