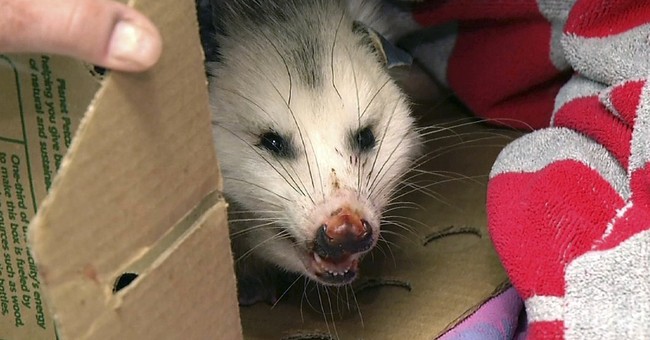 With all of the chaos going on in D.C. and around the country, it's easy for some stories to fall through the cracks. Here are three of this week's underreported stories we thought you should know about. Some will make you cringe...while others will make you laugh.

3. A doomsday prepper spent the last 30 years illegally prepping for a disaster.

An 80-year-old Utah man spent the last 30 years illegally stockpiling guns and grenades. He then hid the weapons, along with food, in various bunkers throughout the Utah wilderness, the Associated Press reported.

“His only intent was to defend what he had there if the end of the world was to come,” Iron County Sheriff’s spokesman Lt. Del Schlosser said.

The man illegally built four bunkers in the wilderness on land that is owned by the state and federal government. His buildings weren't discovered until a wildfire swept through the area. Two of the man's bunkers were burned down and ammo exploded.

According to Del Schlosser, the man didn't live in the bunkers. He lived in a nearby town but was preparing the bunkers in case of a government collapse or societal problem.

The man also had weapons stored in various barrels in trash cans throughout the woods. Altogether, he had eight locations spread throughout a two-mile radius.

Authorities are still investigating and have yet to release his name. They are also determining whether or not to charge him.

After a safety and sanitation review in October, administrators ordered a deep cleaning and extermination. During the review process, there was evidence of insect and rodent droppings, unrefrigerated food and dirty drawers and storage racks, the Miami Herald reported.

According to Shane Suzuki, a public affairs officer for the Miami VA, no patients were impacted by the hazardous conditions because their food was prepared in a separate area from the public cafeteria.

“There are now no reported issues involving the canteen kitchen,” Suzuki told the Herald.

Suzuki also said the area that was contaminated was found in a bathroom and a storage closet that are separate from the dining area.

“Out of an abundance of caution, we conducted a thorough extermination, deep clean and re-inspection of the entire canteen," Suzuki said.

According to Scott Davis, an Atlanta VA employee and whistleblower who has testified in front of Congress, this is nothing new for the agency.

“Roaches and food is a consistent thing throughout the VA,” Davis said.

Although Florida's health department frequently inspects public facilities that serve food, the VA is exempt from this process because they're federally run.

1. An opossum broke into a liquor store...and got drunk.

On Nov. 24, an opossum broke into a Florida liquor store and drank a bottle of bourbon, the Associated Press reported.

“A worker there found the opossum up on a shelf next to a cracked open bottle of liquor with nothing in it,” Michelle Pettis, a technician at the refuge, told the Associated Press. “She definitely wasn’t fully acting normal.”

The animal was pale, excessively salivating and appeared disoriented. The refuge pumped her full of fluids to help flush her system. After a couple days, the opossum was back to normal.

The store's owner, Cash Moore, says this is a first.

"She came in from the outside and was up in the rafters, and when she came through she knocked a bottle of liquor off the shelf,” Moore said. “When she got down on the floor she drank the whole damn bottle. But it just goes to show that even the animals are impressed with Cash’s."