NFL Football Player and Fan Exemplify Excellence Off the Field 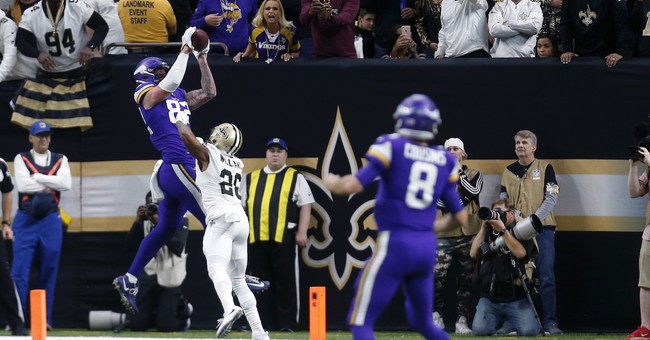 This past Saturday, the National Football League playoffs kicked off with Wild Card weekend. With two games going into overtime and the others being just as competitive, it was an entertaining weekend for football fans. It was an especially good weekend for the Minnesota Vikings and the team's Pro Bowl tight end, Kyle Rudolph.

On Sunday, defying the expectations of everyone except their fans' and their own, the Minnesota Vikings rolled into Mercedes-Benz Superdome and defeated a talented New Orleans Saints football team in overtime. Kyle Rudolph scored the game-winning touchdown, catching a floater to the back corner of the endzone from quarterback Kirk Cousins.

Post-game in the locker room, it was "a zoo," as Rudolph described on Twitter. Players and media were everywhere. At some point, a man who claimed to be a member of the media approached the player of the hour, asking Rudolph if he could have his game-worn gloves as a donation for a charity event. Rudolph didn't hesitate. He gave the man the gloves and even signed them.

As it turned out, the supposed reporter had an ulterior motive for asking for the gloves, and a Twitter user brought it to Rudolph's attention.

@KyleRudolph82 You probably already heard this, but looks like someone sold your gloves from the Saints playoff game on ebay already. Hope they didn’t deceive you for a quick buck. pic.twitter.com/CcRlfMcKVl

Rudolph responded to the tweet, explaining how he was deceived and that the gloves were sold on eBay three days after the game. He also stated he didn't know the man and said the individual couldn't have been a local or national reporter.

"I saw this.. [sic] it's disappointing," Rudolph tweeted.

I saw this.. it’s disappointing. A member of the media in the locker room after the game asked if he could have my gloves for a charity benefit, so I said of course and I will even sign them for you! Well he got me, sold on eBay 3 days later.. https://t.co/JCTO0OWM5n

And to clarify it was not anyone I knew.. so wasn't a local reporter I see daily or national reporter. Locker room was a zoo, he asked for them, I said of course and even offered to sign them... https://t.co/fCdU4RlhnP

But the story doesn't end there. The man who bought the gloves off eBay, Jason King, saw what had happened, and reached out to Rudolph to try to make things right.

"I'm the guy who bought them. I will gladly donate to a charity of your choice," King replied.

@KyleRudolph82 I’m the guy who bought them. I will gladly donate to a charity of your choice.

Of course, Rudolph saw the tweet and asked King if he'd donate the gloves to the M Health Fairview UMN Masonic Children’s Hospital. Rudolph also made a promise to King: "I will make sure to get you my pair from this weekends [sic] game!"

Hey Jason, really cool of you to do this! @UMNChildrens will greatly appreciate it and I will make sure to get you my pair from this weekends game!

The children's hospital was thrilled by the news and chimed in.

Hey Jason! What a kindhearted thing to do for the children and families under our care. DM us and we'd be happy to connect with you.

Since the exchange, the hospital has received more than $13,000 in donations.

We ?? the positive momentum that all of you have created for our hospital community.#WPMOYChallenge Rudolph

It's important to note that this isn't Kyle Rudolph's only charitable act. He's his team's nominee for the Walter Payton Man of the Year Award, which "recognizes an NFL player for his excellence on and off the field."