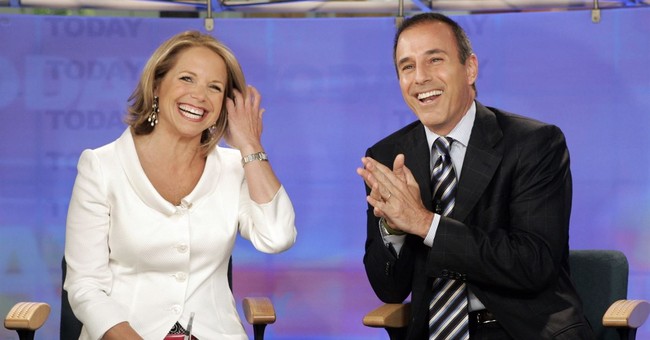 Hollywood titan Harvey Weinstein is ruined. He’s done. Finished. The once big-time producer whose reputation in Tinseltown was dotted with success and infamy is now facing serious rape allegations. This is the Me Too movement. For years, you had to go through Weinstein to achieve success and he could turn on you in a moment’s notice given what we’ve heard about this individual. A couple of years ago, scores of women came forward not just against Weinstein, countless men in entertainment and media who had behaved badly and frankly, deserved to be raked over the coals. Most of the stories from this movement were based around horrible tales of sexual harassment. Weinstein’s story is all that, plus sordid allegations of rape from dozens of women. The list is approaching 100. And yes, Weinstein worked hard to make sure these stories were deep-sixed at news outlets.

Ronan Farrow was one. Farrow along with producer Rich McHugh was going deep into the Weinstein allegations. The further they got, the more resistance they felt. McHugh detailed the history in Vanity Fair, where he mentioned that the effort to stop them reached insane levels; McHugh was spied on by private security firm contractors. And when their work was published at The New Yorker, the NBC brass, in his words, tried to gaslight him, saying they were 100 percent behind them the entire time. Not true. It’s a long narrative about how the Left protects their own in these situations. It’s only bad when Republicans commit these heinous acts, right? But when a Democrat, a. liberal, or someone from the liberal media establishment is accused of acting like a barbarian, circle the wagons, cave to their lawyers, and literally tell the folks looking into these allegations to “stand down.” McHugh details how NBC News chairman Andrew Lack and news president Noah Oppenheim were the quarterback team trying to torpedo the Weinstein story on his lengthy piece, but the real reason appears to be revealed towards the end when former NBC Today Show host Matt Lauer was accused of gross sexual misconduct. And yes, there is a serious allegation of rape in which Lauer allegedly forced a woman to have anal sex with him covering the Olympics in Sochi (via Vanity Fair):

…an NBC employee approached the network’s HR department with a formal complaint against Matt Lauer, then NBC’s biggest star and arguably the most powerful person at 30 Rockefeller Center. Her complaint, which detailed sexual-misconduct allegations against Lauer, rocked an industry already reeling from allegations made by numerous female journalists about Charlie Rose, the CBS News anchor. Two days after the complaint was filed, the network fired Lauer and began meeting with the staff to do damage control.

Meeting with our investigative unit in a now-familiar bit of performance art, Oppenheim talked about it being a “sad and difficult day” at NBC and expressed gratitude to the “brave young woman who came forward on Monday night.” Then, in what proved to be a move he likely regrets, he asked if those assembled had any questions.

The blowback was immediate and fierce. One colleague asked if the allegation against Lauer was criminal in nature. Oppenheim responded that the woman “did not describe the conduct using the word criminal.” Another asked if it involved sexual assault or harassment. Oppenheim responded that the alleged conduct began in 2014 in Sochi, the site of that year’s Winter Olympics, and continued afterward. “Some of the behavior took place in the workplace, and Matt Lauer is Matt Lauer,” Oppenheim said. “And this person was an employee of NBC. So there’s obviously a power differential there.”

I raised my hand. “Prior to Monday, a lot of us have heard…rumors about Matt,” I said. “Let’s just say that. So, prior to Monday, was NBC aware of any allegations of sexual misconduct against Matt?”

“No,” Oppenheim flatly responded. “No. I mean, we went back and looked, and as we said in the statement, there has not been an allegation made internally in 20 years in terms of through the HR channels and any place where there would be a record of such a thing.

Oppenheim and Lack had dropped enough hints in various meetings to enable me to figure out who Lauer’s accuser was—Brooke Nevils. I invited her for coffee, and asked if she wanted to talk about what had happened. She accepted, and spoke at length about all of it.

“I said no,” she said, pausing to let that sink in.

Back in her own room, Nevils said, she threw up. When she woke up the next morning, blood had soaked through her underwear. The bleeding continued for days.

It should be noted that years earlier, former NBC anchor Ann Curry—fired from Today by network executives in 2012, after clashing with Lauer—had alerted NBC management about Lauer’s misconduct after a female employee told her she had been “sexually harassed physically” by Lauer. “I told management they had a problem,” Curry told the Washington Post, “and they needed to keep an eye on him and how he deals with women.” So when Oppenheim told us that there were no previous allegations concerning Matt Lauer and sexual misconduct, that was untrue. As was his claim that the allegation that would be Lauer’s undoing wasn’t “criminal” in nature.

At the time, I wondered if there was some sort of connection between NBC’s decision to stop me and Ronan from investigating Weinstein—a decision for which Oppenheim and Lack had offered no credible explanation—and the network’s rejection of any institutional responsibility for what Lauer had done. Weinstein was a staggeringly powerful man whose serial predation went on for years, in part because he was able to insulate himself via aggressive legal tactics that included payoffs and nondisclosure agreements. Could it be that NBC News knew it couldn’t risk having our reporting on Weinstein presented by a powerful news anchor with his own history of serial predation?

I asked a former NBC executive that very question. Was our Weinstein story killed because NBC knew it had a Matt Lauer problem?

“One thousand percent,” the former executive told me.

Ronan makes the same connection in Catch and Kill. According to two sources at American Media Inc.—publisher of the National Enquirer—Weinstein made it known to NBC that he was aware of Lauer’s behavior and capable of revealing it. NBC, in a statement to Vanity Fair, flatly denies that it was “made aware in any way of any threats” from AMI. But I find it hard to believe that claim, having personally witnessed my former bosses repeatedly misrepresent what they did and said at the time.

The tragedy is that these creeps deserve to be exposed and punished. Justice should come to these women who have been abused. This is all-around disgusting and unacceptable. Everyone can get behind that. Everyone can agree with that. The problem is that, like they always do, the Left has politicized it to the point where it’s now a political football. Their Super Bowl was the Brett Kavanaugh nomination fight, one of the nastiest in recent memory, where the Left weaponized Me Too to derail a supremely qualified lawyer from serving because a) Trump had nominated him, and b) he was a conservative. If there is anything that gets liberals animated, it’s their affinity to keep baby-killing legal. That was the reason why Christine Blasey Ford, the main witness to Kavanaugh’s alleged debauchery, came forward—her lawyer admitted it. Ford couldn’t remember any key details. How she got to this party where a teenaged Kavanaugh allegedly assaulted her, how she got home, who was there, who hosted it, or why there was even a party to begin with—but she is sure as hell that Kavanaugh attacked her. Nope. Sorry, belief is not evidence.  It was hearsay. It was a political hit job under the guise of Me Too. and in the end, it was total trash. The Left went for it on fourth down and got stuffed by reality. And because of that—sadly, every allegation is now viewed more skeptically, even ones where the evidence is all there. Still, circling back to Lauer, it wouldn’t shock me in the last if the NBC brass knew that Mr. Matt was a bit of a creep. And that vulnerability on the flanks is a pretty good reason for running interference on a solid new story. There is the bias liberals say doesn't existent in the mainstream media: one of their own was on the target list.