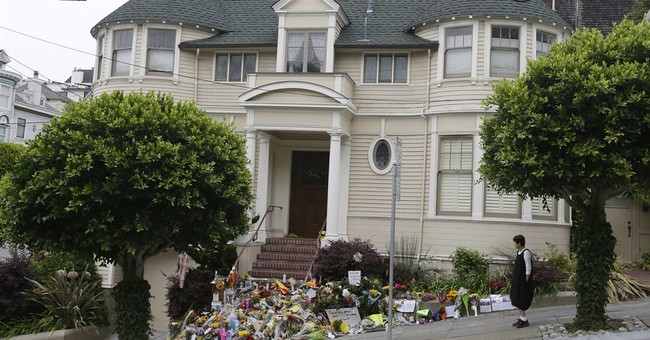 The late comedic genius Robin Williams gave us so many iconic roles during his career. But one of the most memorable will always be his turn as a female British nanny in the 1993 classic, "Mrs. Doubtfire." And now, according to reports, there's an alternate version that never made it to theaters. The account Film Facts tweeted out the message that caused a movie lover frenzy.

While filming 'Mrs. Doubtfire' (1993), Robin Williams improvised so much that there were PG, PG-13, R, and NC-17 cuts of the film pic.twitter.com/vjYUCmyrj2

Matt did some research for us to confirm the rumors.

Regarding the NC-17 version of Mrs. Doubtfire, @IMDb says one does exists : pic.twitter.com/4MO0eZwaYb

A little more digging and we find director Chris Columbus's interview with Yahoo! Entertainment, where he divulged how he did indeed have a few more colorful versions of the film left on the cutting room floor.

Columbus says that his Mrs. Doubtfire star, the late Robin Williams, was “without a doubt, the best actor I’ve worked with.” In order to accommodate Williams’ gift for improvisation, the director used multiple cameras at once — “like shooting a documentary” — so that he could capture the other actors’ faces as they watched Williams’ comic genius at work. “For instance, in the dinner scene toward the end of the movie, the other actors had no idea what he was going to say,” says Columbus. “And it was getting their expressions and reactions the first time they ever heard him say something like that.” Thanks to Williams’ rapid-fire — and sometimes off-color — improvisation, Columbus said that he ended up with four different cuts of Mrs. Doubtfire in the editing room: “literally, a PG rated version of the film, PG-13, R, and NC-17.” (Yahoo! Entertainment)

The beloved film begins with the distraught protagonist Daniel Hillard as he gets divorced. Worried that he'll barely ever see his kids again, he decides to disguise himself as a nanny so he can get hired by his ex-wife Miranda, played by Sally Field, to do housework. It's zany and wild and a whole lot of fun. And apparently Williams had too much fun with the role. So, fans wondered, are we ever going to see the unedited, potty-mouthed Mrs. Doubtfire?

Recommended
In Less than 3 Months, Joe Biden Has Turned America Into a Sitting Target for International Aggression
Julio Rivera

I would give the entirety of my stimulus for the NC17 of mrs. Doubtfire

The R rated Mrs. Doubtfire would be the best thing I’ve ever seen. https://t.co/9Kx1V28SnH

Joe Pesci apparently had a hard time keeping his language in check during the filming of the "Home Alone" movies. So we'll be waiting for those adult releases too. By the way, another fun fact, the first two "Home Alone" films were also directed by Chris Columbus.

Until then, enjoy this fan-made cut of the trailer that spins it into a horror movie.