Tim Allen Explains What He Liked About President Trump 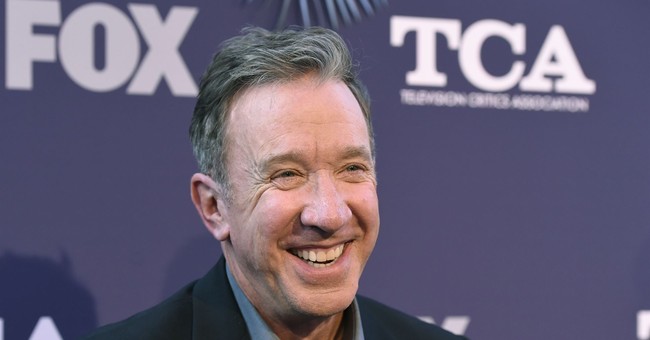 Tim Allen recently appeared on Marc Maron’s “WTF” podcast and made some headlines. The media is always itching to ask him about his politics, particularly after he attended Donald Trump's inauguration in 2017. Allen had been pretty mum about Trump now, but when their discussion waded into politics, Allen revealed what he liked about President Trump.

“Once I realized that the last president pissed people off, I kind of liked that,” Allen said. “So it was fun to just not say anything. Didn’t join in the lynching crowd.”

We got a sense of Allen's conservatism via his character on the comedy "Last Man Standing." As Mike Baxter, he liked to poke fun at the political correctness at his daughter's school and sometimes threw a few zingers for Hillary Clinton.

Mike: Wow. Hillary Clinton's asking us for money. Will her string of mistakes never end?
Eve: The hits keep on coming, but she'll never top Benghazi. That's her "Stairway to Heaven."
Mike: Yeah, that's the kind of screw-ups that happen when you spend all your free time deleting e-mails.
Vanessa: It's not a mistake. I donated to Hillary. I think it's time.
Mike: Well, I think it's time to pierce my broken heart with this knife.
Eve: Mom, I know you love the show "Scandal," but do you really want to watch it every night for four years?
Vanessa: Yes, I do. And every night, I will be in a different pair of pajamas.

Allen, however, has not told the press exactly which party he belongs to, only that he doesn't like taxes.

“My political party is that I’ve never liked taxes, period, so whatever that means...I don’t like paying people who never seem to do what I would do with my money," he told Entertainment Weekly in 2018. "I always thought it would be funny if I had a little menu on my tax returns where I could tell them where my money would go.”