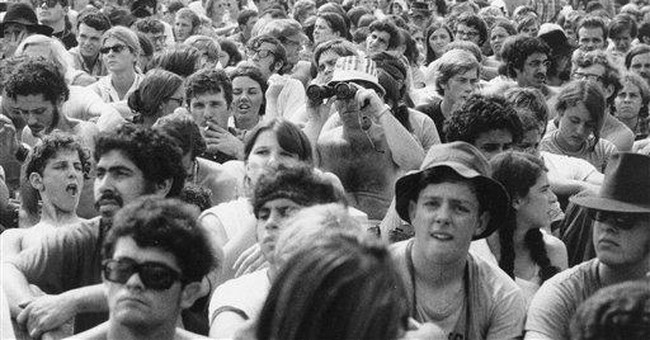 Music fans still talk about Woodstock to this day. Hundreds of thousands of people flocked to a dairy farm in Bethel, New York in the summer of 1969 to see the likes of Jimi Hendrix, The Grateful Dead, and CCR grace the stage for the world's most iconic rock concert. They'll be talking about Woodstock 50 too - but for a much different reason. Just about everything went wrong for the organizers behind the Woodstock 50th Anniversary Festival, and it's now curtains closed.

First, there was some trouble with the production company (which changed hands a few times.) Then the festival’s financier, Dentsu Aegis, pulled its funding. Then major artists started pulling out of the concert. Then they lost the venue.

The organizers were working on trying to secure a new location, the Merriweather Post Pavilion in Columbia, MD, but they were dogged by other delays, such as safety concerns. And as of last week the tickets hadn't even gone on sale. (The show was scheduled Aug. 16.)

I'm sure you know where this is going. Woodstock 50 is now...officially not going to happen.

Michael Lang, co-founder of the Woodstock Music and Arts Festival and Woodstock 50 promoter, stayed adamant that the show would go on, until Wednesday, when he threw in the towel.

“We are saddened that a series of unforeseen setbacks has made it impossible to put on a festival we imagined with the great line-up we had booked and the social engagement we were anticipating," Lang said in a statement.

"We worked hard to find a way to produce a proper tribute—and some great artists came aboard over the last week to support Woodstock 50 — but time simply ran short," he regretted.

Merriweather Post operator Seth Hurwitz hoped that one day the venue will "become the site of a future festival that captures the original vibe."