Why Gov. Bullock's Plan to Expand Medicaid Is Wrong for Montanans 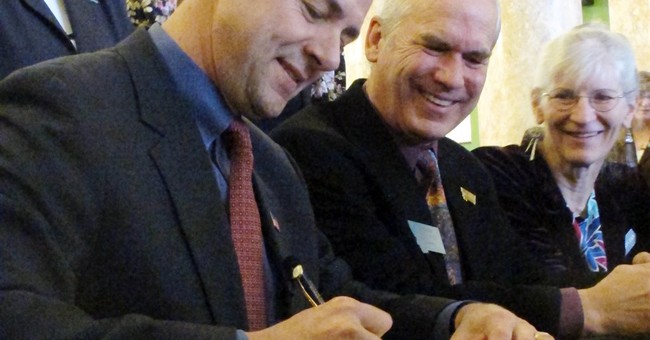 As more and more Americans come to personally understand Obamacare’s many deficiencies, they’re rightfully outraged that state lawmakers would work to exacerbate its consequences even further. But instead of heeding that warning, a handful of Governors and lawmakers have gone to greater lengths than ever before to make sure Medicaid is expanded under Obamacare in their states.

In Virginia, Governor McAuliffe attempted to hold up the entire budget for the state of Virginia over the expansion, against the clear wishes of the people of the Commonwealth.

Despite endless legislative jockeying that put the state at risk of a government shutdown-- and shady backroom deals-- Governor McAuliffe was forced to break his principal campaign promise that he “would not sign a budget that does not expand Medicaid” when the legislature refused to send him a bill to do it.

Tennessee Governor Bill Haslam expected the special deal he worked with the Obama administration would easily sail through the legislature, but his allies at the Capitol found themselves swamped with grassroots opponents -- and legislators took note -- ultimately stopping the bill dead in its tracks.

Lessons seemingly unlearned, Montana Governor Steve Bullock is back at it, after several failed attempts, trying to ram though his own version of his plan to expand Medicaid. And this time, he’s pulling out all the stops.

Rather than accepting defeat, he’s attempting to bypass the democratic process to be sure his bill passes. He’s turned to Montana’s procedural “silver bullet,” negotiated for this session to skip the committee process, where he knows the bill will fail, and instead force it to the floor for a vote. Earlier this session, the committee killed his first bill and he’ll do anything to stop them from doing it again.

If Governor Bullock looks like he’s grasping at straws, he may well be. He’s one of the only Democratic governors who has failed to expand Medicaid in his state – and failed to do it

But even worse, Governor Bullock is determined to put an end to any one that stands in his way. Now, Governor Bullock is about to sign a bill that would silence thousands of free-market advocates and other groups advocating against Medicaid expansion. His bill is far reaching and it would have chilling effects on free speech, and he’s doing it, all so he can stop his opposition and force big-government healthcare on the people of Montana.

Back in 2013, after Bullock’s first expansion attempt was stopped by the vote of a single legislator, he and his allies rallied again. They teamed up with a coalition of big-labor groups and other K Street special interests to transform the bill into a ballot initiative in time for the November elections. He came up short once again when he failed to find enough signatures to qualify.

Yet in spite of the Governor’s aggression towards free-market advocates and procedural derring-do, nothing changes the risks of expanding Medicaid. Other states that have tried it are paying dearly.

Everywhere you look, the result is the same: the expansion costs states far more than what they originally projected. The only options for states who have gotten themselves into this financial mess are to cut funding from other critical priorities like schools, public safety, or roads-- or raise taxes to plug the holes. Montana shouldn’t take this risk.

Montanans need real free-market solutions that create good-paying jobs; policies that give the most vulnerable the ability to lift themselves up and live out their own version of the American dream.

But the Governor’s plan is not that answer. All it does is shackle 77,000 new Montanans to a system that already fails to provide adequate access to healthcare for its current beneficiaries.

Bullock has a clear choice: press Montana to cast its lot in with hyper-liberal states like Maryland and California, or join other centrist states who’ve had a healthy debate over this and seen it for what it is: just more of the ObamaCare mess.