Young Voices Contributors
|
Posted: Nov 25, 2021 12:01 AM
Share   Tweet
The opinions expressed by columnists are their own and do not necessarily represent the views of Townhall.com. 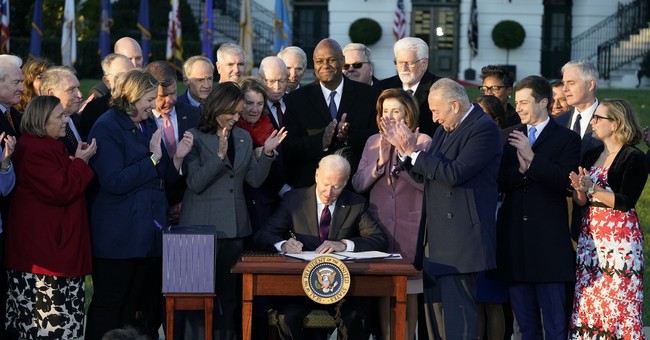 Earlier this month, with great fanfare on the left and right, Biden signed a Bipartisan Infrastructure Deal (BIF), calling it “a once-in-a-generation investment in our nation’s infrastructure and competitiveness.”

Too bad it will provide no meaningful relief to the American people.

BIF was sold to the public under false pretenses, and if anything, it will only exacerbate the current economic crisis, worsening inflation and restricting private sector growth. In addition, it implements policies that negatively impact the non-affluent and provides the wealthy east and west coasts — which tend to be Democratic safe havens — with disproportionate tax relief.

Members of Congress worked to popularize BIF by assuring the American public that it would be fully financed so as not to increase the federal deficit, that it would not raise taxes, and that it would create lots of blue-collar jobs.

These selling points are largely untrue.

About half of the infrastructure package is funded through the repurposing of COVID-19 relief funds. The rest of the deal will be financed through deficit spending to the tune of nearly $400 billion. Deficit spending begets inflation, and inflation erodes the real value and spending power of each US dollar. This disproportionately affects the working and middle-class Americans who are already struggling due to recent price hikes caused by runaway inflation.

BIF also pushes private sector internet providers out of the marketplace by allocating $100 billion to promote the government and government-affiliated NGOs as providers of broadband. This will inevitably give the government more control over the internet and how it is accessed. Furthermore, it will likely trigger a decline in quality of service, as is nearly always the case when the government takes it upon itself to provide a good or service. Just look at how the government’s involvement in healthcare and student loans made both industries weaker. There is no reason to believe the results of government control over internet access will be anything less than a disaster.

A reasonable bipartisan argument can be made that American infrastructure is in need of a facelift. After all, repairing our deteriorating bridges and interstate highways system was one of the largest selling points of former-President Trump, and many Republican strongholds stand to benefit from resuscitating our infrastructure. However, this spending package will not adequately address these concerns as it disproportionately prioritizes left-wing ideological goals while implementing policies that hurt entrepreneurs and the middle class. It allocates $20 billion to initiatives advancing racial equity and environmental justice in infrastructure; it spends $213 billion on efforts to retrofit affordable housing units with technology emphasizing green energy; and it makes “the largest investment in passenger rail since the creation of Amtrak,” which hardly stands to benefit the American public writ large. This legislation might deliver piecemeal relief to areas in need of renovation, but it is more likely to give the majority of Americans the shaft.

President Biden’s assurances that the Bipartisan Infrastructure Deal will create “millions of good-paying jobs” and be a “blue-collar blueprint” benefiting the working class are simply untrue. To be fair, the BIF will inherently generate some employment through investing in public works, but recent expert analysis from the University of Pennsylvania’s Wharton School of Business reveals that the legislation will have a net-zero effect on employment, wages, and economic growth in both the short and long term. The reality is that public works programs do not yield the economic boon that politicians often expect them to produce.

The bipartisan infrastructure package also disincentivizes private-sector activity. Hidden away in this legislation are new tax requirements on holdings of cryptocurrencies — like Bitcoin. The legislation stipulates that “brokers” of cryptocurrency — platforms like Coinbase or the Winklevoss twins’ Gemini Exchange — must issue 1099-B forms to the IRS detailing the assets held by their customers for purposes of enhanced tax reporting. BIF also requires private businesses to report each time they process over $10,000 in cryptocurrency to the IRS or face felony charges.

Finally, while this legislation fails to provide meaningful relief to the working and middle classes, it will provide tax breaks for wealthy coastal elites in Democrat electoral strongholds through the reimplementation of state and local tax (SALT) deductions. SALT deductions work by allowing taxpayers to deduct taxes paid to state and local governments from the amount of income reported to and subsequently taxed by the federal government. These deductions overwhelmingly benefit the wealthy by giving them a break on their federal taxes which means the revenue that Democrats promised would finance the infrastructure deal will not be available. SALT deductions shift the federal tax burden to rural areas and red states while protecting the interests of wealthy, coastal blue states.

In an era of profound economic uncertainty, this legislation fails to deliver on its selling points. It will not deliver meaningful relief to the working and middle classes, and it is not fully financed, which will result in inflationary spending. The Bipartisan Infrastructure Deal prioritizes left-wing policy goals over repairing American infrastructure.

Samuel Mangold-Lenett is a resident of Cincinnati, Ohio. His writing has been featured in the Daily Wire, Daily Caller, The Federalist, and other outlets. He is the Editor-in-Chief of the Cincinnati Republic. Sam is a Young Voices contributor and an alum of the National Journalism Center. Follow him on Twitter @Mangold_Lenett.