AUKUS Is a Good Start. Now the UK Must Join the Quad.

Young Voices Contributors
|
Posted: Sep 23, 2021 12:01 AM
Share   Tweet
The opinions expressed by columnists are their own and do not necessarily represent the views of Townhall.com. 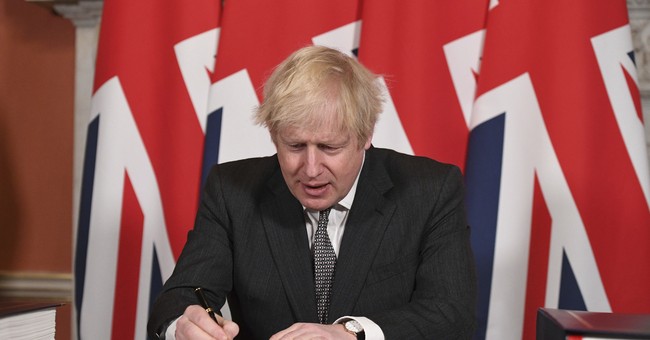 Editor's Note: This piece was authored by Sam Lewis.

“If you do not shape the world, you will be shaped by it.” That’s what George Osborne, who served in the administration of British Prime Minister David Cameron, had to say about the Battle for Aleppo in the Syrian Civil War back in 2016. Soon after his remarks, the Syrian Army, supported by Russian airstrikes, cemented President Assad’s brutal regime. Today, it seems we’ve finally learnt the lessons from Syria. This week’s unprecedented jointly televised announcement of a new defensive partnership between the UK, US and Australia, dubbed AUKUS, is a testament to this fact. The trilateral agreement to invest in nuclear submarine fleets in the Pacific is welcome news, especially after the West’s decision to leave Afghanistan in the horrifying scenes we witnessed last month.

But does this commitment to help Australia counter China’s power in the region go far enough?

This year’s Integrated Review from the British government highlighted the desire for the UK to establish “a greater and more persistent presence than any other European country” within the Indo-Pacific. Now it’s time to put those words into action and join the Quad — a strategic dialogue between the US, Japan, India and Australia that is committed to “a shared vision for a Free and Open Indo-Pacific”.

Though the Quad is still far from a formalised organisation — it lacks a secretariat and a permanent decision-making body like NATO or the UN — it acts as an important conduit of multilateralism within the Indo-Pacific. Since 2017, dialogue between its members has become more frequent, and in 2020, the groupings’ first joint military exercises in over a decade took place. Just last week, President Biden announced the first in person meeting of each nation’s leaders would take place at the White House on 24th September.

Britain should seek to be involved in future meetings.

Why? Because the world is safer when Britain gets involved, and there is no better time to assert our ambitions. After the U.S.’s tragic withdrawal from Afghanistan, it’s natural to question whether there is the political will or resources to be involved in parts of the world far away from home. The answer must be a resounding yes. Our fellow liberal democracies, Japan, Taiwan, India and New Zealand, have already welcomed the news of AUKUS. To join Quad, take part in joint military exercises and future consultations in the region is the next step in reasserting our commitment to the international order.

Another important reason is that we have very tangible economic interests in the Indo-Pacific. Still fresh from our departure from the European Union, Britain has been eager to seek trading opportunities elsewhere. Given Asia is on track to become 50% of global GDP by 2040, it can be no surprise that on 1st February this year, we applied to become a member of the CPTPP, a trade pact representing some 500 million people across 11 countries in the region. We also mustn’t forget that some $5.3 trillion worth of trade goes through the contested South China Sea each year. By joining the Quad, we can show we’re committed to the peace and security of Asia, and not simply some far off, small nation hoping for a quick buck that will scramble at the first sign of trouble.

Finally, it is important to assert ourselves in the region as a counter to the creeping totalitarianism that is sweeping Asia. Twice this year, countries that border China have fallen to anti-democratic forces. In Burma in February and more recently in Afghanistan, militaries have seized control, using their new powers to curtail free speech, free press and women’s rights alongside other unsavoury acts. We can’t expect China to act in a way favourable to our values. They have, after all, supported a murderous regime in North Korea for many years and are themselves committing human rights abuses in Xinjiang. By joining the Quad, we can assert our voice within the region and stand up for the liberal values we hold dear.

China, which was subjugated by the will of foreign powers during its ‘century of humiliation’, knows all too well that shaping the world requires being active within it. Britain must find its voice now that we have left the EU. The centre of world events is moving to Asia, and we must use our post-Brexit flexibility to follow it.

Maps of the world within Chinese schools put the Middle Kingdom at the centre of the globe. Across the Pacific is an equally sized United States. In the top left, a small blob, more like a stain on the map than a country, sits the UK. It’s time to show Asia we aren’t just some small blob off the edge of a continent, destined to obscurity. It’s time for the UK to make the Quad a Quintet.