Does The Nobel Peace Prize Mean Anything?

Young Voices Contributors
|
Posted: Feb 09, 2021 12:01 AM
Share   Tweet
The opinions expressed by columnists are their own and do not necessarily represent the views of Townhall.com. 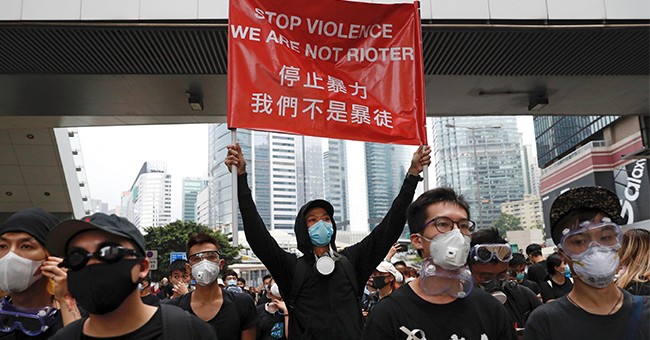 Editor's Note: This piece was authored by Sebastian Thormann.

Norwegian MPs have reportedly nominated the Black Lives Matter movement for their nations' Nobel Peace Prize for "raising global awareness and consciousness about racial injustice." This comes amidst other reports that media-hyped climate activist Greta Thunberg has been nominated for the prize again. Stacey Abrams, the Democratic candidate who refused to concede her 2018 race for Governor in Georgia, has been compared to Martin Luther King in her nomination for this year's prize.

Now, a nomination doesn't amount to being awarded one. There's still a long process ahead. But given that the prize has been handed out for similar social justice reasons in the past, for example, to President Obama for merely being elected, it's fair to ask: Does the Nobel Peace Prize mean anything anymore? If so, then there's a protest movement that actually deserves it.

After they successfully fought the proposed Hong Kong extradition bill in 2019 and scored massive wins in the 2019 District Council elections, Beijing responded by promulgating the so-called National Security Law in early 2020. Instead of introducing the bill in Hong Kong's Legislative Council, it was passed by the mainland communist-controlled Standing Committee of the National People's Congress. This eliminated the activists' ability to pressure their local government to withdraw it, as happened with the extradition bill.

The legislation had an immediate effect: An unprecedented police crackdown on civil liberties ensured. Since then, countless protesters have been arrested for violating this law by displaying pro-democracy or pro-independence slogans and symbols. Government-critical teachers were suspended, and any mention of separation of powers was scrapped from school textbooks, as Chief Executive Carrie Lam vowed that all "institutions are accountable to Beijing through an executive-led system of governance."

In July, the opposition held primaries to nominate candidates for the 2020 election to win a "35+" majority in the Hong Kong Legislative Council. Twelve of these nominees were disqualified, four of those incumbents. A few months later, the government suspended elections under the pretext of the coronavirus outbreak for at least a year. The four disqualified incumbents were then removed from the Legislative Council, leading to opposition lawmakers' mass resignation. Subsequently, high-profile activists like Joshua Wong and Agnes Chow were then sentenced to prison for organizing an "unlawful assembly." Finally, more than 50 pro-democracy politicians were arrested this January under the national security law for organizing said primaries. This leaves almost every prominent opposition figure in Hong Kong in jail.

It takes a lot of courage to go out and protest a regime that will almost certainly put you behind bars for it. Contrast that with the BLM movement. Even in the US, it's easier to support BLM than to show support for the Hong Kong protest movement: Take, for example, the NBA banning "Free HK" shirts to please China while going to extensive lengths to virtue signal to BLM and other social justice causes. The Black Lives Matter movement has enjoyed large-scale support across corporations, sports leagues, and public institutions like colleges. Indeed, some groups like Netflix even seemed to shame those who didn't explicitly voice their support, proclaiming: "To be silent is to be complicit."

And it's not just private institutions. In some of America's largest cities, like DC, government officials ordered "Black Lives Matter" to be painted across streets or renaming streets. In many cities, officials partially fulfilled BLM's rallying cry of "defunding the police" by significantly cutting police budgets or restricting local police departments in their use of force—while violent unrest was ongoing.

So let's recap: While Hong Kong dissidents face prosecution for their protests, BLM in the U.S. is widely cheered on. But most importantly, American protesters enjoy the freedom of speech and right to peaceful assembly - the very freedoms Hong Kongers are increasingly denied. BLM is mostly about protesting instances of police misconduct and alleging systematic police injustice that has yet to be proven. It's not an existential fight for democracy. For Hong Kong activists, it is. They have to fight an uphill battle for the right to speak their minds freely.

Their courage in standing up to an oppressive regime and their cause in fighting for the most basic freedoms far outweighs that of BLM or other social justice groups in the West. If a protest movement like BLM is considered for the Nobel Prize, then Hong Kong's pro-democracy movement is the one that most deserves it.

Pennsylvania School Board Member to Parents: 'I Don't Work for You'
Townhall
Virginia Dem accidentally shows why Joe Biden does NOT have any sort of mandate
Twitchy
A Canadian COVID Hysteric Goes to Florida and Absolute Hilarity Ensues
Redstate
Where the Hell Are the Men?
PJ Media