The Fight over DACA Makes Home Hostile for Young Immigrants

Young Voices Contributors
|
Posted: May 23, 2018 12:01 AM
Share   Tweet
The opinions expressed by columnists are their own and do not necessarily represent the views of Townhall.com. 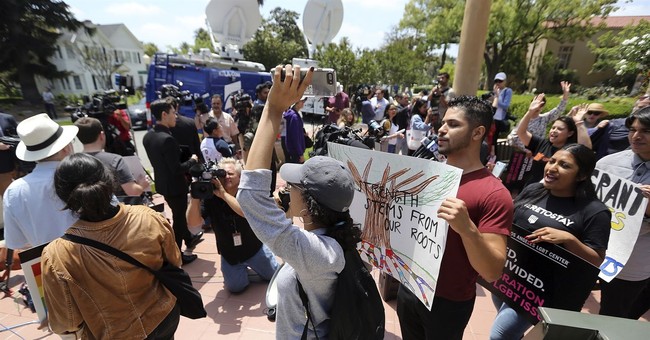 Editor's Note: This column was written by John Kristof

Between May 9 and May 18, nearly two hundred lawmakers have signed a petition that would force the House to vote on a crucial piece of immigration legislation.

If passed, House Resolution 774 would force a floor vote on immigration reform. After being discharged on May 9, the resolution requires a petition signed by 218 representatives to be considered. As of May 21, 196 representatives have signed the petition, including 20 Republicans––all 193 Democrats and five more Republicans would need to sign the petition to reach 218 signatures.

One of the key issues are the fates of nearly 700,000 young people at risk of deportation should Trump administration successfully phase out the Deferred Action for Childhood Arrivals program (DACA), as he initially promised last fall. Although the DACA program presently remains intact, its long-term legal status is up in the air after its removal has faced legal challenges from federal judges while seven states have sued the Trump Administration to force its dissolution.

The Obama administration created DACA in 2012 to buy time for some undocumented immigrants while Congress developed comprehensive immigration reform. Under certain conditions, DACA allowed people who illegally entered the country as children to receive official documentation. Through this program, Dreamers could go to school, work, have a driver’s license, own a home, and pay taxes. DACA allowed migrants to make a life for themselves in the only home most of them have known.

If approval for a DACA recipient expires, that person is considered “unlawfully present.” If the immigrant works, she legally must be fired; if she is a student, she must lose federal financial aid; and if she happens to be a homeowner, she must move out.

In theory, if DACA expires, recipients would pack up and move back home. This very notion fails to appreciate who Dreamers are. DACA affects undocumented immigrants who crossed the border as children, almost always were brought by their parents. Although they may have been born in another country, DACA recipients grew up, went to school, and worked in the United States. Their “native” nation is often more foreign to them in the United States. Subjecting former recipients to deportation is not simply a matter of making them return home; it forces them to abandon the life they built and start anew in a land of strangers. Because home is the United States for most Dreamers, the majority will likely choose to remain in the country and hope they do not run into trouble.

Unfortunately for former DACA recipients, trouble has become much harder to avoid. During the Trump administration’s first year in office, Immigration and Customs Enforcement (ICE) has increased arrests by over 40 percent. Most of that increase is due to a shift in focus that came with the changing of the guard. Under the Obama Administration, ICE focused resources on detaining undocumented immigrants with criminal activity. Since President Trump took office, ICE has shown little regard for the civility of the undocumented immigrant, arresting non-criminal persons at twice the rate in 2017 as it did in 2016. With a backlog of over 650,000 cases, detained migrants have little hope of a speedy judicial resolution.

Only a handful of Republicans have signed the petition, but they can no longer afford to stall a resolution to the DACA question. DACA is not just a Democratic talking point – nearly 340,000 people in states that swung red in 2016 are DACA recipients. Nearly nine out of ten of them use DACA to work legally, contributing over $16.6 billion to their states’ economies. Without DACA, Republican states would lose almost $270 million in tax revenues. Although GOP lawmakers are slowly endorsing a nativist immigration policy, the numbers indicate embracing DACA reform is good for their constituents and their local economies.

Some GOP lawmakers see immigration as a positive but are concerned that DACA incentivizes migrants to cross the border illegally. Since DACA’s establishment, however, illegal immigration rates have dropped, so other factors appear more influential on a family’s decision to migrate. Even if reducing illegal immigration was the primary concern of DACA reform, repeal is misguided.

Dreamers did not choose to immigrate illegally, and repealing DACA would make them outlaws in their own land, increasing illegal immigration to boot.

A number of Republican congressmen assured constituents that Congress had plenty of time to create a permanent, comprehensive immigration solution. After eight months, there is no reason to delay action any further and treat young immigrants like political pawns. The time has come for legislators to demonstrate the leadership they promised and pass humane immigration reform. All Americans benefit when we treat Dreamers like the neighbors they are.

John Kristof is a Research Fellow at the Sagamore Institute in Indianapolis and a freelance writer with Young Voices Advocates. Follow John on Twitter @jmkristof.