Young Voices Contributors
|
Posted: May 18, 2017 12:01 AM
Share   Tweet
The opinions expressed by columnists are their own and do not necessarily represent the views of Townhall.com. 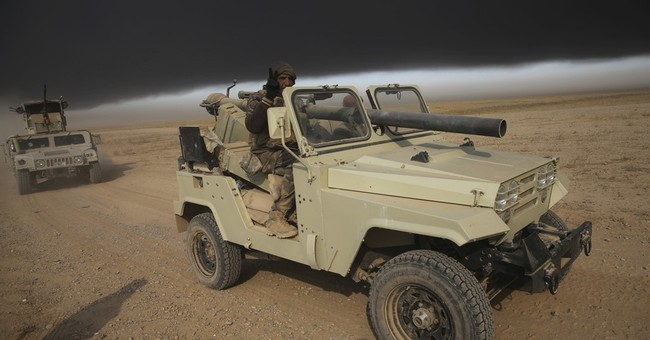 With the recent decision to deploy additional troops to Iraq and Syria to help in the assault on Mosul and Raqqa, the two largest cities within the Islamic State’s self-proclaimed Caliphate, it appears that the Trump administration has begun to take the first steps towards re-engaging the US military in another Middle East intervention.

Yet, while the prospect of more boots on the ground in the Middle East inflames passions among some members of the media and the occasional politician, the continual flow of US armaments into the region hardly seems to register on the public agenda. In 2015, US companies sold $209.7 billion worth of military equipment, $33 billion of which was to Gulf countries.

According to the Defense Department, the purpose of US arms sales to foreign governments is to “strengthen the security of the U.S. and promote world peace.” Decades of arms sales throughout the world have firmly entrenched the idea within US foreign policy that arms transfers are an effective way to achieve these goals. This way of thinking is so pervasive that despite the growing evidence that the widespread distribution of weapons can be antithetical to the promotion of peace and stability, there is little debate or analysis over the efficacy of US arms transfer policy. Indeed when looking at the diffusion of American-supplied armaments throughout Iraq and how they ultimately helped to arm the Islamic State, it is clear that arms transfers can actually help fuel conflicts and destabilize regions.

As part of the US-led nation-building efforts following the 2003 invasion and occupation of Iraq, the Bush administration decided that the creation of a well-armed security force was a key component of ensuring stability within the region. As a result, the US-led coalition began flooding Iraq with military weapons and equipment. According to Amnesty International’s 2015 report, Taking Stock:The Arming Of The Islamic State, the coalition transferred “more than 1 million infantry weapons and pistols with millions of rounds of ammunition to the Iraqi armed forces” between 2003 and 2007.

Endemic corruption, a severe lack of recordkeeping within the Iraqi government, and a liberal policy of arms distribution by the coalition led to a disturbingly high rate of discrepancies in tracking weapons and equipment. According to a 2007 report by the Government Accounting Office, around 190,000 arms distributed by the coalition within Iraq since the invasion were unaccounted for. Estimates in 2007 from the Defense Department’s special inspector general for Iraq reconstruction, placed the number of missing weapons from the same time period at close to 500,000. These deficiencies in weapons tracking haven’t disappeared. A 2015 report from the DOD noted that the Iraqi Army was using “a manual paper-based system for tracking supplies and equipment,” thereby making any knowledge of equipment location or quantities “very difficult.” It’s no wonder then that the Pentagon has records for less than half of the estimated 1.45 million firearms transferred to Iraq and Afghanistan between 2001 and 2016. The untraceable nature of these recordless weapons makes diversions from intended recipients all the more likely, with many ending up on the burgeoning arms black market.

Even after the US officially withdrew combat forces from Iraq in December of 2011, it continued to supply the government with large quantities of military equipment. Between 2011 and 2014 the US signed billions of dollars worth of contracts for armaments, ranging from assault rifles and small arms, to tanks, humvees, and F-16 fighters. With the rapid rise and expansion of ISIS in 2014, much of this US-supplied equipment fell into the hands of the militants.

In one of its greatest triumphs, in June 2014, 800 ISIS fighters routed two Iraqi divisions--approximately 30,000 men--in Mosul. The subsequent abandonment of equipment and supply depots in and around the city by the Iraqi military allowed ISIS to seize up to 2,300 US-supplied Humvees, as well as tanks, armored personnel carriers, and enough small arms and light weapons/ammunition to arm between 30,000 to 60,000 troops.

It is difficult to say exactly how much US equipment has ended up in the hands of ISIS and other militant groups since recording and tracking systems for weapons distributed within Iraq are notoriously unreliable. However, there have been numerous documented instances of ISIS fighters using a wide variety of US-manufactured armaments ranging from assault rifles and anti-tank weapons systems, to light armored fighting vehicles.  Additionally, US-manufactured ammunition seems to make up a sizable percentage of ISIS’ arsenal. A study conducted by Conflict Armament Research that examined cartridges collected from battle sites in Kurdish areas of Northern Iraq and Syria in July and August of 2014, found that 20 percent of the spent cartridges used by ISIS forces were manufactured in the US.

Despite the role US weapons have played in arming one of the most barbaric terrorist groups in human history, no one in Congress or the general public seems to be concerned about what effect our policies on arms transfers are having in the Middle East and abroad. Indeed, the Trump administration has already signaled a renewed laissez-faire attitude towards transfers, recently authorizing a controversial plan to arm the Y.P.G., a Kurdish militia fighting ISIS in Syria, with an additional $100 billion deal with Saudi Arabia quickly moving down the pipes. Weapons transfers to the Y.P.G. have been highly debated due to the group's connection with the P.K.K., a Kurdish separatist organization currently in conflict with the Turkish government, and labeled as a terrorist group by both the US and Turkey. Additionally, arms sales to Saudi Arabia were previously restricted under Obama due to concerns over the Saudi’s indiscriminate bombing campaign in Yemen in which one third of strikes target civilians.

Increasing troop deployments and weapons transfers throughout the world display the Trump administration's strong preference towards the use of force in trying to resolve international issues. Given this preference, it is more important than ever for the public to be informed about the negative effects of the US’ heavy reliance on arms transfers as a tool of foreign policy. Regardless of our intentions, the fact is that US weapons supplied to the Middle East are oftentimes used in unsavory ways by multiple sides in the very conflicts they are suppose to prevent. Sizable numbers can even end up in the hands of our enemies.

The time has come for a reassessment of US arms transfer policy. We must ask ourselves whether pouring weapons into regions engulfed in conflict truly help to stabilize them, or simply add more fuel to the fire.

Jack Hipkins graduated from the University of California, Santa Barbara in 2016. He researches US grand strategy and the interconnection between US foreign policy and trends in global conflict.