Young Voices Contributors
|
Posted: Apr 26, 2016 12:01 AM
Share   Tweet
The opinions expressed by columnists are their own and do not necessarily represent the views of Townhall.com. 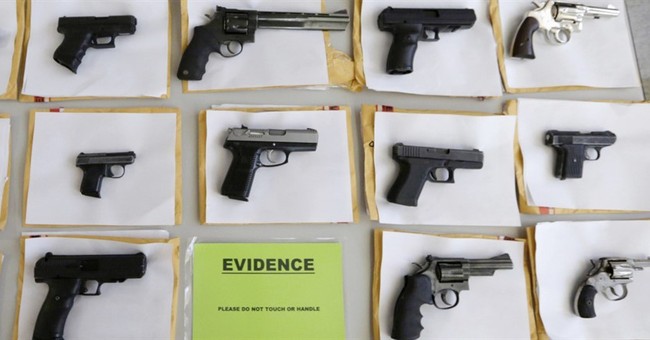 Editors note: This column was authored by Brett Linley

The Democratic primary has become increasingly antagonistic over the past few months, with Hillary Clinton continually lambasting Bernie Sanders for his support of immunity for gun manufacturers.

These repeated attacks have caused Sanders to abandon what was perhaps the only moderate plank of his candidacy, with the Vermont Senator reversing his position earlier this month.

But gun manufacturers can already be sued if they are at fault. There is no blanket immunity, and claims to the contrary only make sensible gun reforms more difficult.

Parents of the Sandy Hook victims are currently suing gun manufacturer Remington Arms, for their production of a firearm used by shooter Adam Lanza. Their argument is that manufacturers like Remington should be held responsible when their firearms are used for illegal—and often tragic—purposes.

This debate carries important implications for what liability truly means.

At the center of the debate is the Protection of Lawful Commerce in Arms Act (PLCAA), which Senator Sanders supported and then-Senator Clinton opposed in 2005.

For Clinton, this is proof she has stood up to the “gun lobby,” while Sanders has given the NRA free-reign.

The truth is less black and white.

The PLCAA does grant immunity to firearms manufacturers for crimes committed with their firearms. But this is not a blanket immunity.

In short, gun manufacturers can be held liable, if they are found to be negligent,  in the same way as other manufacturers of consumer products.

The exception is the general provision that grants them immunity if their firearms are used in a crime without their knowledge.

Consider this issue through the lens of other industries. If Toyota sells someone a Camry that is perfectly functional in every way, it is unreasonable to expect Toyota to pay damages if the person they sold it to gets drunk and collides with another driver. There is no realistic way that Toyota could have prevented such an accident.

If a retailer sells a CutCo knife to someone who later uses the kitchen knife in a stabbing, it would defy logic to argue that Cutco should be held responsible. There is no level of precaution CutCo could take that would eliminate any chance of a crime, aside from ceasing all production.

When we apply this logic to firearms, it’s hard to see how Remington could have anticipated or prevented the tragedy of Sandy Hook. The firearm in question was bought legally by a reputable retailer, sold to the mother after she passed a background check, and then illegally taken by the shooter to commit this tragic crime.

Everyone wants to see gun crime reduced. If people are illegally obtaining firearms they should be prosecuted along with the provider.

What Clinton won’t tell you is that there are laws that exist to deal with this. She would prefer to continue showboating on a campaign of misinformation,

Sanders has already backed down and promised to support a law to reverse the little immunity the firearms industry possesses. For a candidate who theoretically runs according to his own principles, it’s a disappointment to see him bend so easily to enemy fire.

Legitimate debates can be held about the proper amount of gun control in a society. People can freely argue for and against restrictions on firearms, and these arguments are all generally motivated by a desire to have a free society that is also safe. But these goals will not be met if non-issues like “blanket liability” are the focus of debate.

Useful solutions can gain bipartisan support. But only if there is respect for the facts at hand, and the economic realities we live in. So-called blanket immunity for gun manufacturers does not exist, and claims to the contrary only make reform more difficult.

GOP Congresswoman Does What We All Want to Do to a Prius in New Ad
Matt Vespa
The CDC Just Released New Stats on Children and They Are Alarming
Katie Pavlich
Why a School Staffer Came to Work in Blackface to Protest COVID Vaccine Mandate
Matt Vespa
Flip Flop: DHS Chief Debunks Fake 'Whips' Narrative, Then Abruptly Adopts 'Horrified' WH Posture
Guy Benson