This Hanukkah, We’re Reflecting on a Season of Miracles

Yael Eckstein
|
Posted: Nov 28, 2021 12:01 AM
Share   Tweet
The opinions expressed by columnists are their own and do not necessarily represent the views of Townhall.com. 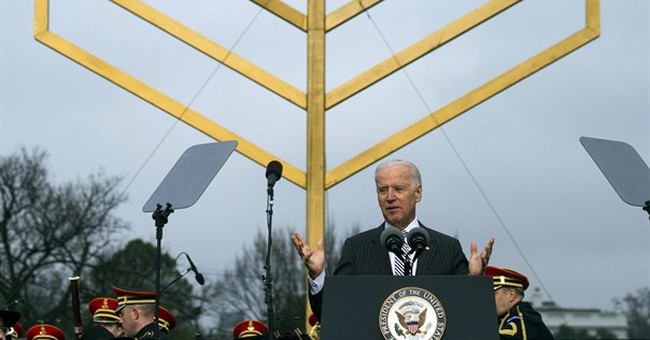 Today, Jews around the world are celebrating Hanukkah, and Christians are preparing to celebrate Christmas. Though we are nearing the shortest, darkest days of the year, for people of faith it is the season of light, and the season of miracles.

Hanukkah celebrates both a miraculous military victory, and a miraculous spiritual victory. It is easy to think, though, when we celebrate these holidays with such ancient roots, that miracles are just a thing of the past.

But for the Jewish people, one of the greatest miracles in this season and throughout the year, is the miracle of the Jewish peoples’ return to Israel – a miracle expressed by the Hebrew word “aliyah.” Aliyah reflects the deepest aspiration of many Jews. “Making aliyah” simply means Jewish people returning to their biblical homeland, Israel. These pilgrims returning home are called “olim.” In 2021 alone, it is projected that more than 5000 olim will relocate to Israel by year’s end.

Some olim return in order to restore and reconnect with their Jewish roots. Others move to escape violence and anti-Semitism. Many return to be reunited with families they were separated from by both time and tragedy. Whatever the circumstance, making aliyah acknowledges the miracle God worked nearly 75 years ago when he allowed His people to reclaim their ancient land and create the modern State of Israel.

In my work with the International Fellowship of Christians and Jews (The Fellowship), I meet olim regularly and am inspired by their stories every day. One olim from the former Soviet Union, named Vitalii, said his grandmother burned every document that identified her as a Jew and changed her surname. Vitalii changed his name back and made aliyah to Israel so he and his family could embrace their faith and his children could live proudly and openly as Jews. “In Israel, the first words I heard were, ‘Welcome home,’” said Vitallii. “I finally feel I’m where I belong.” This year, Vitalii’s family celebrated their first Rosh Hashanah in Israel.

Larisa said her family made aliyah because they were the last Jewish family left in their hometown in Uzbekistan, which used to have a vibrant Jewish community. “There was no future for Jews in our region,” she said. “I wanted my children to grow up as Jews. If we stayed, they would have forgotten their Jewish roots.” Larisa has other reasons as well. Her mother was suffering from diabetes and could not get adequate health care. Israel promised a solution. In addition, Larisa’s oldest son had already made aliyah. The trip saved her mother’s health and reunited their family.

Chirley was working as a teacher at a Jewish school in France when it was attacked by terrorists intent on slaughtering Jews. “On the day the lessons were supposed to start, I wasn’t at the school. But I heard a lot of loud noises and sirens,” Chirley recalls. “A friend called to tell me there was a terror attack. I was so happy to make aliyah and live in Israel where I can worship openly and educate children in their Jewish faith.”

This continuous stream of aliyah populates this special place that all of God’s children call home. People like Vitalii, Larisa, and Chirley, coming from all over the world, make Israel a nation with dozens of accents and nationalities, and truly bring to life the words in the Book of Isaiah that promise the return of God’s people from “the four corners of the earth.” Their presence in Israel helps Israel become a stronger, more vibrant Jewish state.

We are working 24/7 to help Jewish people resettle in Israel, with the steadfast support of Christian friends and allies. By supporting aliyah, Christians are able to help fulfill God’s command to bless Israel. In 2020 alone, we helped 4000 olim immigrate to Israel from thirty different countries. And since our founding, we have helped relocate more than 750,000 Jews from forty-seven nations to the Promised Land.

In the years since my husband and I made aliyah ourselves, I’ve personally heard countless stories of the blessing it is for so many Jewish people to make their way home. With the help of Christian friends, we’re saving lives and fulfilling prophecy on a daily basis. Sometimes I have to pause and remember how truly miraculous this work is.

This Hanukkah, as I celebrate with my family the miracles that happened in biblical times, I will remember the miracle that is happening around us today, every day – the miracle of aliyah. Perhaps this is the first you’re hearing of aliyah, or perhaps you have been helping the process all along. Either way, I hope Christians in America and beyond know how vital this is for Jews around the world, and how thankful we are for your support. I truly believe, as God tells us in Genesis 12, that He will bless you for blessing His people.

Yael Eckstein is the President and CEO of the International Fellowship of Christians and Jews. In this role, she also holds the rare distinction of being a woman leading one of the world’s largest, religious not-for-profit organizations, having raised $1.8 billion — mostly from Christians — to assist Israel and the Jewish people. Her most recent book is, Generation to Generation: Passing on a Legacy of Faith to our Children.