Denying the Truth at all Costs 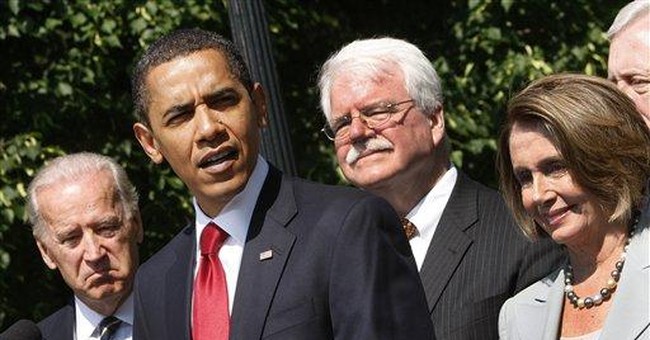 Politics and policy has become surreal. Webster’s defines the term as “bizarre or dreamlike”. No word better describes the current state of affairs.

For yet another example of the “dreamlike” suspension of reality that is everyday Washington, D.C. consider the recent announcement from union-toady, Congressman George Miller. Miller is proposing to spend $100 billion on a bailout of local governments. That is $100 billion we will have to get from China or the Federal Reserve’s printing press to allow local governments to pretend a little while longer that they can act like spoiled children without consequence.

The Miller proposal would funnel the massive sum of borrowed money to local governments so they can “save or create” jobs. Boil it all down and the Miller scam is exposed as a temporary fix for the junkies who are attempting to avoid withdrawal at all costs. But cold-turkey withdrawal is exactly what they and America need.

The facts are well known. Government at all levels has grown faster than any other segment of the economy. Government, also, pays far more than corresponding workers in the private sector and has lavish benefit packages unmatched by any private worker. As the Cato Institute detailed in their January, 2010 Tax & Budget Bulletin # 59, the compensation scales and benefits of government are simply unsustainable. They cannot continue; there must be an adjustment.

But blocking that “adjustment” is the primary goal of labor unions. And whatever Big Labor wants, George Miller will try to deliver. So, the $100 billion bailout is meant for one thing and one thing only; paying off the unions and avoiding for even a little while the inevitable downsizing of government. Since the largest expenditure any government makes is on personnel, that downsizing means one thing – firing tens of thousands of unionized public employees.

Think for a second what Miller and his cronies are asking of American families, taxpayers and businesses. They want us to go deeper into debt, to the tune of another $100 billion, to pay employees we don’t need to do things that are of marginal value. We are eating our seed corn. This money will not be spent on things that will allow future growth and production, future prosperity. It is to be squandered on consumption. Like the raging alcoholic, full of bravado, we are maxing out the American credit card to buy lunch for everyone in the barroom.

The situation we confront is basic. We all know the nature of the choice. All of us were taught this choice as small children. We should all remember the story of the grasshopper and the ant. The grasshopper frittered away the summer, eating and having a great time. The ant, on the other hand, worked and saved and did without, so that he would have provisions for the winter. When winter arrived, the ant is secure and prepared while the grasshopper froze, starving from lack of food.

George Miller and his union masters are the grasshoppers of our time. They eat and drink and live in a dreamlike state where the bill never comes due. The only problem, of course, is that they do have a plan. They plan to stick all of us with the bill for their reckless behavior.

It’s time we ants took matters into our own hands. The credit card needs to be cut into pieces. Local governments, as well as states and the Federal behemoth, need to face the facts. They have to live within the means of the people that fund them. The insane, surreal politics of spending and debt must come to a stop.

Any member of Congress, regardless of party, who opposes the Miller scheme should be praised and supported. Any local government that does the right thing and cuts its functions and personnel needs backing. Conversely, those who embrace the bizarre world of George Miller need to be shown the door. They are simply too sick to be in a position of authority.