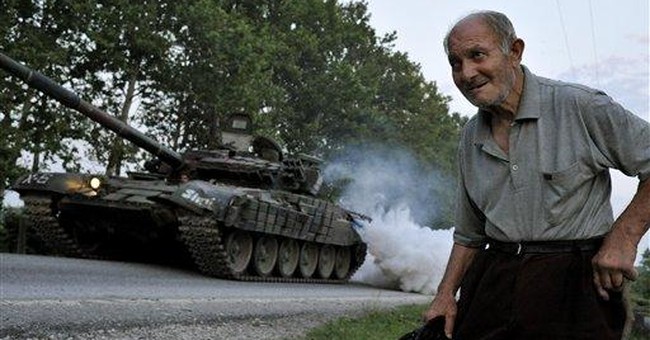 I hope my six-decades-long reputation as a redoubtable Cold Warrior will protect me from the suspicion that "Rusher has gone soft on Moscow" if I confess that I am considerably less worried by Russia's recent move into Georgia than many American observers seem to be.

I say "seem to be," because there are all sorts of political reasons why the two major American parties find it in their interests to profess deep concern over this development. Bush, early in his presidency, professed to have looked deep into Vladimir Putin's eyes and descried there something not far short of a soulmate. He cannot afford to open himself to the charge that he was simply taken in by a wily Russian. He must, therefore, be seen to respond firmly -- even belligerently -- to Moscow's move.

And certainly the Democrats, who suffer from a lurking suspicion among many voters that they are "soft" on Russia, must equally avoid affording any credence to that accusation.

So both parties are going to go out of their way to condemn Russia's action. And certainly, in purely technical terms, it deserves condemnation. Georgia is a sovereign country, with borders that are (or ought to be) theoretically inviolable. For Russia to move tanks and troop carriers into that country with no legitimate excuse is an outrageous violation of international standards, even if (as seems likely) it soon withdraws them. At first blush, one might be forgiven for concluding that the Cold War is back.

But I suggest, with all due respect, that such a conclusion is, at best, wildly premature. Russia, though it is certainly no Soviet Union, is a major nation with an understandable interest in what goes on with its next-door neighbors. Georgia is a small bordering country with two areas (South Ossetia and Abkhazia) heavily populated by Russians. What Russia did was send armed forces into Georgia0 in support of these areas. This served to remind both the Georgians and the local Russians that the latter have the sympathy of their neighbors -- and neighbors, moreover, who have impressive resources if push ever comes to shove.

Georgia could hardly be expected to be pleased with this -- nor could the Western powers, including the United States, that have long encouraged Georgia's separatist inclinations where Russia is concerned. But Moscow's move fell far short of a full-scale invasion and occupation of Georgia. It is clearly concentrated on the two pro-Russian enclaves. It looks like a firm reminder to Georgia that there are limits to what Moscow will tolerate and (far more important) limits to what the Western powers can prevent.

Thus regarded, it is an unpalatable but nevertheless useful reminder of some cold facts. The West cannot prevent Russia from exercising considerable influence over Georgia, nor could it, short of precipitating and winning a Third World War, liberate Georgia if Russia invaded and occupied it. Since we are certainly not going to risk any such thing, Russia is going to continue to be a major factor in the affairs of Georgia.

Is this anything the West cannot live with? I can't see why. Nostalgists for the Cold War may try to seize on this development to inflame Russia's relations with the West and revive the whole East-West struggle. But I think Russia is now quite likely to let matters quiet down again, having given a useful reminder to Georgia -- and all the other small neighbors on Russia's vast periphery -- that good behavior will be appreciated.

In reaching this conclusion, I recognize that there is an inescapable element of risk. But if Russia has indeed embarked on a new policy of aggression, there will be plenty of time to recognize that fact and respond accordingly. Meanwhile, I recommend staying cool.