William Marshall  |  Jun 16, 2020
The opinions expressed by columnists are their own and do not necessarily represent the views of Townhall.com.
Top Columns
Trending on Townhall Media 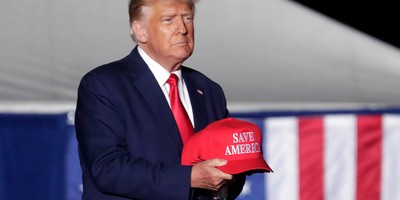 Why did FBI agents deployed in DC take a knee? Why are police officers around the country taking a knee Why did a crowd of white liberal Bethesda, Maryland residents get down on both knees before some black activists? Houston, we have a problem.

I was raised to believe that you only kneel before God. And in my Catholic upbringing, the Pope, being Christ’s Vicar on Earth.

Kneeling is a powerful symbol in human expression. It signifies, depending on the context, submission or respect, or both. But what exactly does it mean in the wake of George Floyd's death, whose neck was knelt upon by Minneapolis police officer Derek Chauvin, which presumably led to Floyd’s death?

The law enforcement people who are kneeling presumably are doing so in a show of solidarity with those protesting the death of Mr. Floyd. The intent, I assume, is to let the protesters know that the police officers, too, found the action of officer Chauvin reprehensible and thereby hope to lower tensions.

I think this assumption is based on false premises.

One such premise is that the protesters can be reasoned with. That notion presumes that they are rational. If the protesters were rational in their desire to drive home the point that "black lives matter," they would be protesting in Chicago, Baltimore, Detroit and other major cities where thousands of blacks are murdered every year at the hands of other blacks, as opposed to the much smaller fraction of blacks killed every year by police officers. And of those, only a relative handful are killed by police while unarmed (putting aside for the moment the unique circumstances of each case and that an “unarmed” individual can also be very dangerous). A total of nine “unarmed” black people were killed by police in 2019.

Moreover, there is an apparent misapprehension among some of those who protest about what constitutes an “unarmed” individual. The recent case of the police shooting death of Rayshard Brooks in Atlanta is a case in point. At the time he was shot, he had pointed a taser at an officer after taking It from the officer and punching another cop.  Many people think that a taser in the hands of Mr. Brooks didn’t pose a deadly threat to the officers.

In an excellent presentation offered by a former police officer, Brandon Tatum, who happens to be African-American, Mr. Tatum explains why the police officer who shot Brooks was completely justified in doing so, and would have been justified under the policies of any police department in the United States. In his assessment, Mr. Brooks was entirely responsible for the fate that befell him from all the actions he took that night, starting with being drunk behind the wheel, falling asleep in a drive-thru restaurant line, resisting officers who attempted to arrest him after he failed a sobriety test, assaulting an officer, stealing another officer’s taser, and then pointing the taser at the officer while fleeing. Mr. Brooks escalated a situation unnecessarily to the point where he posed an immediate threat to police officers doing their job and they took an action in self-defense by shooting him.

The second false premise the kneeling craze is based upon, related to the first, is that kneeling demonstrates empathy with blacks who feel they are being targeted by racist police officers. Again, we can point to data to debunk this trope of endemically racist police. These data show that black suspects are actually less likely to shot by white police officers than by black police officers.

Perhaps the foremost social scientist who has studied police use of deadly force is the Manhattan Institute’s Heather Mac Donald. As she points out in the Wall Street Journal, “A 2015 Justice Department analysis of the Philadelphia Police Department found that white police officers were less likely than black or Hispanic officers to shoot unarmed black suspects.”

The fact of the matter is that we do not yet know the motivation behind Minneapolis police officer Derek Chauvin’s kneeling on the neck of George Floyd, which set off the current nationwide pandemonium and mass destruction. Did Chauvin have animosity toward blacks, or toward Mr. Floyd in particular because he was black? I am unaware of any evidence demonstrating that at this point.

The men reportedly had unpleasant encounters when they both worked security at a local Minneapolis nightclub and reportedly “bumped heads." Perhaps a personality clash played a role in Chauvin’s actions.

Video which captured the moments of Floyd’s interaction with police officers before Chauvin knelt on his neck showed Floyd strongly resisting police efforts to arrest him. Perhaps that resistance so enraged Chauvin that he went too far in subduing Floyd, resulting in his death.

The point is: Chauvin’s motivations cannot be assumed to be racist merely by the fact that he is white and Floyd was black. Yet that is the narrative that has been created, pushed and seemingly accepted across the nation, even before the facts have been fleshed out at trial.

The recent kneeling phenomenon as a demonstration tactic seems to have been launched in 2016 by former NFL quarterback Colin Kaepernick, who took a knee during the playing of the National Anthem as a general gesture of opposition to “racial oppression” that the multi-millionaire black athlete claimed American history represented. Now it has been adopted by pusillanimous police officers and politicians across the land submitting to the mob in hopes of keeping it at bay.

Such disgraceful displays are neither logical nor effective. At best, they represent a form of Stockholm Syndrome, with those debasing themselves hoping to earn the affection, or at least self-restraint, of those who burn, loot and murder. At worst, they are emboldening the basest elements of humanity.

Let’s stick to kneeling before the Supreme Being, who is the Creator of all, and restore dignity to those who are charged with keeping us safe and civilized.

William F. Marshall has been an intelligence analyst and investigator in the government, private, and non-profit sectors for more than 30 years. He is a senior investigator for Judicial Watch, Inc., and a contributor to Townhall, American Thinker, and The Federalist. Follow him on Twitter at @BillMarshallDC1. (The views expressed are the author’s alone, and not necessarily those of Judicial Watch.)