A Soul-Restoring Movie For These Difficult Times

William Marshall
|
Posted: Nov 05, 2019 12:01 AM
Share   Tweet
The opinions expressed by columnists are their own and do not necessarily represent the views of Townhall.com. 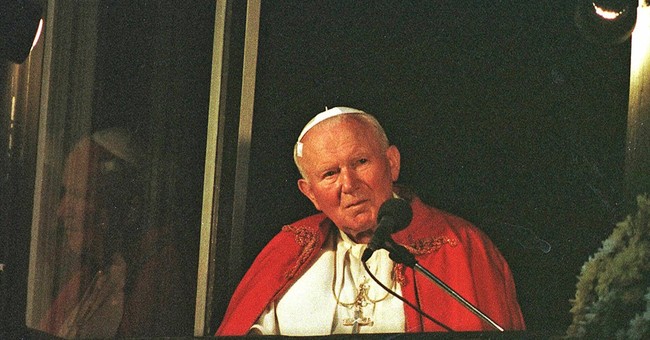 Our country is being torn asunder by a rogue establishmentarian government bureaucracy locked arm-in-arm with the Democratic Party. They are trying to overturn the results of the 2016 election of a disruptor president who won by promising to destroy their corruption. To worsen matters, a shocking embrace of socialism by much of the American populace, especially the youth, is taking place. These are dark times. A new movie has thankfully arrived on the scene to give us renewed hope. It will appear on Wednesday, November 6, in theaters nationwide for one night only.

The movie, produced by Rob Orlando, is called The Divine Plan. I had the pleasure of attending a pre-screening of the film during CPAC last February. I had the opportunity to meet the creator and some of the eminent individuals who appear in it. Now, the entire country will have the opportunity to remind themselves that we survived an equally dark period – the Cold War – thanks to the unyielding faith and resolute leadership of historic figures featured in this important production.

Americans of every stripe, but especially those under age 30, would benefit immensely by learning, or being reminded, of the incredibly perilous straits through which our country, and indeed the world, passed at that time by seeing the film. We did so thanks to the blessed work of Ronald Reagan, Pope John Paul II, Margaret Thatcher, Lech Walesa, Mikhail Gorbachev and a host of lesser known figures who are depicted in this movie.

The title of the film is drawn from advice that Ronald Reagan’s mother imparted to him as a young boy, when she told him that everything happens to a person in their life as the result of a divine plan. And the intersection of the divine with humanity, particularly in the lives of these characters as detailed in this documentary is eerie, deeply thought-provoking and inspiring.

The movie begins by sketching out the early lives of Ronald Reagan and Karol Wojtyla, who would go on to become Pope John Paul II. It describes their similar interests, characteristics and privations as young men. It addresses the horrors of Nazism, which Karol Wojtyla would witness first-hand in his native Poland, and then those of communism, Nazism’s brutally oppressive successor in much of Europe.

It relates Ronald Reagan’s experience of communist infiltration of Hollywood, when he was the president of the Screen Actors Guild, and how it led to his switching from the Democratic Party to the Republican Party by 1964. Reagan was greatly alarmed, just as we are today, by the embrace by many Americans of communist ideology (although today under the softer sounding, but no less pernicious “socialist” label.)

As the film so ably conveys, both Reagan and Pope John Paul II had a visceral understanding of the dehumanizing nature of communism. In the words of one expert in the movie, Ronald Reagan realized that communism “misread human beings. It didn’t realize, would not acknowledge, the inherent dignity and God-given value of every human being.”

Perhaps the most moving aspects of this movie are the description of the shootings of Reagan and John Paul, only six weeks apart, which caused grievous injuries to both men. They both lost at least half their blood volume, and by all rights, neither man should have survived. They both came to believe deeply that their survival was the result of divine intervention and that it was meant to fulfill a greater purpose: to unite to bring down the evil of communism.

Prof. Paul Kengor, on whose book, A Pope and a President, the film partially relies, discovered through his research of the US government’s determination that the Soviet Union had in fact engineered the Pope’s assassination, using its reliable cut-out, Bulgaria, to provide the assassin, a Turk named Mehmet Ali Agca.

As the expert historians note, however, what the Soviet Union did not anticipate was that their attempt to fell the Pope only cemented the relationship between Reagan and John Paul and furthered their conviction that they possessed a heavenly-ordained mandate to destroy the Soviet system that attempted to destroy the Pope. It was a colossal backfire by the USSR.

Reagan and John Paul’s friendship grew immensely, and they corresponded constantly through written and electronic communications, as well as meeting numerous times in person. Unfortunately, the correspondence between the two men was sealed by the Vatican for 50 years, and so will not be released for approximately 20 more years.

Reagan and John Paul recognized that the fissure in the Soviet Union that they could leverage to bring down the whole decrepit system was John Paul’s native Poland - specifically using the Solidarity labor movement led by Lech Walesa. The president and Pope set up a secret channel of communication using their aides Bill Clark and Archbishop Pio Laghi, who would regularly meet in something called Operation Cappuccino. CIA Director Bill Casey and Ambassador Vernon Walters were also heavily involved, frequently briefing the Pope personally on the operation’s developments using highly classified US intelligence.

Reagan funneled $50 million into the operation, over the objections of his diplomats who advised Reagan against stirring up trouble in Poland. It sounds an awfully lot like the State Department apparatchiks today who push back against the policies of our current president.

One of the most poignant comments in the film appears near it conclusion, when historian HW Brands said of Reagan and John Paul, “They both symbolized, they both represented, they both worked for this single set of beliefs that greater freedom, greater acknowledgement of human dignity, is really important. It turns out that their side won. At least, as of the early 1990s. But it’s an ongoing struggle.”

Indeed, it is an ongoing struggle. Look where we are today. Americans enjoyed an unprecedentedly long economic boom as a result of President Reagan’s tax cuts, rollback of stifling government regulations and embrace of free market principles. Simultaneously, we have seen the utter human and economic catastrophe wrought by socialist policies in Venezuela under that country’s socialist leaders, Hugo Chavez and Nicolas Maduro.  Yet, according to Gallup, 57 percent of Democrats polled in 2018 had a positive view of socialism. A newer poll just released by YouGov shows that 70 percent of millennials (those between 23 and 38) are somewhat are somewhat or extremely likely to vote for a socialist candidate and 51 percent of Generation Z (those between 16 and 22) have a somewhat or very unfavorable view of capitalism.

These data should shock everyone. Why can’t people understand what history has taught us over and over again? Are the 100 million who died under communist and socialist regimes over the last century not enough? We need to be reminded continuously of what Ronald Reagan was fond of saying, “Freedom is never more than one generation away from extinction.” Movies like The Divine Plan are indispensable in teaching that lesson.

William F. Marshall has been an intelligence analyst and investigator in the government, private, and non-profit sectors for more than 30 years. He is a senior investigator for Judicial Watch, Inc., the host of the JW podcast Inside Report, and a contributor to Townhall, American Thinker, and The Federalist. (The views expressed are the author’s alone, and not necessarily those of Judicial Watch.)