Is it June or January in Colorado?

William D. Balgord
|
Posted: Jul 12, 2019 12:01 AM
Share   Tweet
The opinions expressed by columnists are their own and do not necessarily represent the views of Townhall.com. 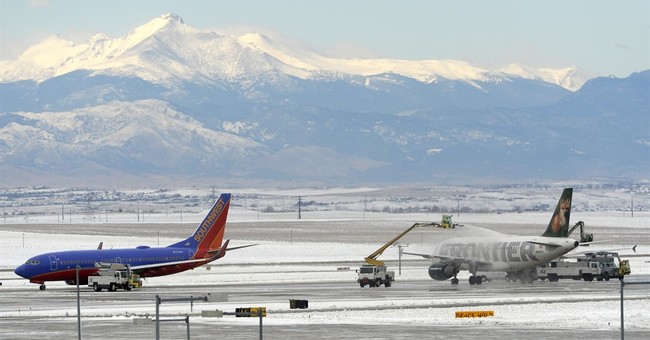 Rare heavy snow fell in Colorado over the summer solstice. The runways at Denver International were covered with the white stuff. Sudden accumulations up to 20 inches or more of fresh snow appeared over higher elevations of the state and spoke eloquently of the quixotic weather on our planet. Even a Bill Nye would have to admit that.

It is tempting to speculate if mid-summer snows were to become a regular pattern in North America again and associated with cool, mostly cloudy summers, annual snow-pack might not melt completely before the arrival of the next winter. Such persistent weather would develop into a climate inviting to another ice age.

This seemingly counter-intuitive hypothetical was advanced by the late climatologist Reid Bryson at the University of Wisconsin, whom I interviewed in Madison a few years ago. Bryson was co-discoverer of the jet stream while serving as staff meteorologist for the Army Air Corps during WWII. He offered this explanation as the proximate mechanism accounting for the formation, growth and repeated succession of the North American glaciers over the past million years. Geologists would call it the Pleistocene Period.

Striations (gouges) on exposed rock surface in Labrador point in the general direction of the US.  They record the flow of a mile-deep river of ice that was to bury Chicago and cover major portions of the Midwest during the 100,000-year lifespan of the continental ice-sheet referred to as the "Wisconsin" glaciation.

Year after year, more snow fell, extending inland from the Canadian Maritime Provinces, than melted during the following summer. Bryson described the proto-glacial climate as being not colder than normal so much as having warmer winters and cool, damp summers.

He further surmised that a comparatively warm Atlantic Ocean at the conclusion of the previous Eemian interglacial period, some 115,000 years ago bore similarity to the present, feeding abundant moisture inland to produce ample snowfall while persistent cloudiness hindered melt-back during the summer. These circumstances, prevailing over time, resulted in steady, net growth of snow cover that eventually accumulated to depths necessary for the transition to plastic ice and glacial flow.

In time Labrador and the adjoining Quebec highlands produced thick enough ice cover that the mass was set into motion and crept slowly toward the Midwest. Several successive glaciations gouged out the Great Lakes and left behind relic glacial features prominent in parts of New York, Michigan, Wisconsin, and Minnesota.

By the time the Northern Hemisphere had settled into a stable glacial climate, ice covered much of the northern half of the US east of the Rocky Mountains as far south as the Ohio River and along sections of the Missouri River.

The remainder of the U.S. lay mostly bare of ice and experienced persistent drought and dusty conditions that obscured the sun and hindered solar warmth reaching the land surface, circumstances that extended the duration of the cold. To escape the ice, mastodons, saber-toothed "Smilodon" tigers and other now extinct large mammals crowded into Florida foraging for food and prey.

In historic times the Little Ice Age followed after the Medieval Warm Period when western civilization had blossomed. Our current Modern Warm Period is best seen as a sequel to several temporary climate optima that came and went during the present interglacial period following the end of the Wisconsin Ice Age about 10,000 years ago. For more than a century during the 17th and 18th Centuries (and earlier) Europe and North America experience a temporary colder climate that triggered crop failures, famine and outbreaks of bubonic plague, smallpox and other deadly disease.

One swallow does not a summer make, nor does one heavy snowstorm on the eve of the 2019 summer solstice necessarily foretell the coming of an ice-age--either a little or a major one. But some of the necessary conditions for a profound climate reversal already exist today and others are not necessarily as remote a possibility as some conventional thinking might otherwise suggest.

But for Coloradoans at least, this winter's heavy snow-pack welcomed an end to a protracted drought in the central Rockies.

Let's give Mother Nature some well-deserved credit for making it happen.