Will Alexander
|
Posted: May 23, 2022 12:01 AM
Share   Tweet
The opinions expressed by columnists are their own and do not necessarily represent the views of Townhall.com. 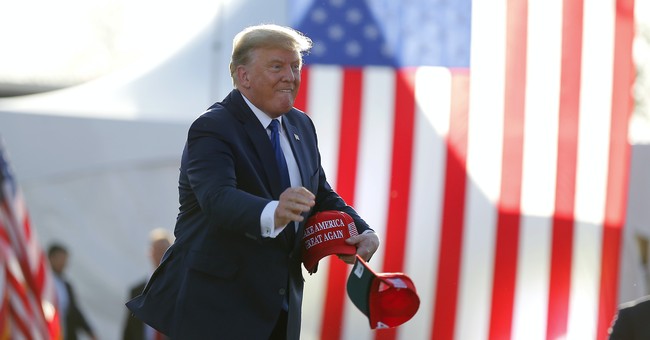 Political psychopaths who jerry-rigged scraps from Trump’s unorthodox style to create the illusion of the most hideous, racist, misogynist, homophobic, Putin-loving, Hitlerian monster that ever lived, have convinced squishy Republicans that the real Donald Trump shouldn’t run in 2024.

“This is one of the greatest political scandals in history,” Trump told Fox News on Saturday about Hillary Clinton being the likely mastermind behind the Russian Collusion hoax.  “For three years, I had to fight her off and fight those crooked people off, and you’ll never get your reputation fully back. … Where do I get my reputation back?”

But Russian Collusion was only one of a never-ending list of filthy tricks Democrats and their collaborators used to destroy Trump’s reputation since the day he was elected: the Charlottesville lie, two phony impeachments, the coverup of Hunter’s laptop, and a constant barrage of woke politicos and pundits twisting the definition of racism to flippantly smear him as a racist.  None of it was true.

Trump’s view on the border, fossil fuels, the economy, COVID lockdowns, the Supreme Court, and so many other consequential issues have created one of the most ignored phrases in recent political history: “Trump was right.”

But these people never stop.  For being right, they hate him even more.

When the 82-year-old speech-ripper Nancy Pelosi was asked by CNN, last week, about the leaked opinion that signaled the possible overturning of Roe v. Wade, she exposed herself as the main spigot for the strategic vitriol against Trump.

“I mean, the point is – who would have ever suspected that a creature like Donald Trump would become president of the United States,” spewed the person who, in March, praised Biden for his extraordinary leadership.  “… waving a list of judges that he would appoint, therefore getting the support of the far right and – ah – appointing those anti – dis – freedom judges to the court.”

Democrats desperately need the hideous version of Trump to keep the party glued together, and to make Trump a political virus for knee-knocking Republicans.  It’s working.

Establishment Republicans are so traumatized by the Democrat-created boogeyman of Trump; so embarrassed by Trump’s unorthodox style; so nostalgic for the superficial dignity of the good ol’ days and desperate for approval, that they’ll do anything to distance themselves from him.

They waiting to get back to “normalcy and stability” as opposed to “lability and extremism,” as Peggy Noonan put it in her column Donald Trump and His Elusive Base in the Wall Street Journal, Thursday.   She believes a good chunk of Trump’s supporters are quietly distancing themselves from him, too.

“But there’s another, larger mood shift going on, and to me it’s the real headline,” wrote Noonan as she assessed “a real sense” of things after last week’s primaries.  “Something is changing among Trump supporters. … They won’t tell pollsters, they may not even tell neighbors, but there was a real sense of: We need Trump’s policies, but we don’t need him. … as a major backer and donor told me, it’s time to think of the future.  Mr. Trump brings ‘chaos’.”

Karl Rove, who in January chided Republicans for not coming down harder on the Jan. 6 rioters and those who “encouraged and aided the attempt to overthrow our democracy,” wrote on Wednesday that last week’s primaries confirmed that angry factions are increasingly defining both parties, and as a result “America’s politics continues to polarize. … Buckle up.”

Even columnist Kimberly Strassel, whose work I respect, seems to prefer Glenn Youngkin’s “focusing on a fix and the future” approach to politics than Trump’s combative style.  Especially when it comes to looking back at the 2020 election.

“He [Youngkin] acknowledged Mr. Biden as the legitimate president while also promising to shore up election integrity,” she wrote in her column The Limits of ‘Stop the Steal’.  Mr. Youngkin ran on a forward-looking agenda to address schools, the economy and crime – and won in a state that has leaned Democratic in recent years.  That tried-and-true formula remains the path for GOP midterms success.”

Bill Barr is reported to have said that the country doesn’t need a lame-duck president settling scores for another four years.  Two-term Arkansas Gov. Asa Hutchison said at the National Governor’s Association’s winter meeting that “I do not believe Trump is the one to lead our party and our country again, as president.”  And Jacquie Baly, a political science professor at the University of Houston believes that “the insurrection” closed the 2024 window for him.

When you consider what Democrats are doing to fundamentally transform the country, “chaos,” “polarize,” and “a very harsh tone” is not extreme, but a natural reaction for a man, Trump, who loves the country, and is using every tool in his box to oppose those who are literally weakening and destroying America as we know it.

We support him, not to be part of some idiot cult, but because he sees exactly what we see: They’re demonizing whites and American history through CRT; opening up the border in violation of federal law; normalizing an extreme LGBTQ ideology in all sectors of American life; strategically exposing school children to explicit sexual content; normalizing crime and criminalizing normal behavior; destroying the fossil fuel industry under false pretenses to stuff green policy down America’s throat; destroying the lives of people and businesses with China-inspired COVID lockdowns, mandates, and restrictions;  looking to institutionalize lockdowns with the impending WHO treaty, transforming election rules, regulations and laws to get and keep power; and abusing technology to restrict speech that’s unfavorable to Democrat government policies.

This stuff is very extreme, and the establishment’s obsession to get back to “normal” – to get back to politics as usual – unfortunately, not only falls short but is misguided and very dangerous for the situation we’re living through.  “Normal” normalizes the arsonists who are letting the fire burn things to the ground, and these people need to be held accountable.  If a Youngkin-type, or even a Ron DeSantis runs and wins the presidency in 2024, these people will not stop.

This may not be the Civil War, but this country is, no doubt, at war.  And establishment Republicans, with their misguided worship of orthodox politics, are completely oblivious to the situation.

They are, as journalist Walter Lippmann wrote in the 1940s, politicians who are “insecure and intimidated men.  They advance politically only as they placate, appease, bribe, seduce, bamboozle … The decisive consideration is not whether the proposition is good but whether it is popular – not whether it will work well and prove itself, but whether the active-talking constituents like it immediately.”

Through lies, deception and outright fraud, Democrats have made Donald Trump extremely unpopular among the “active-talking” people.  Squishy Republicans keep their distance and whisper their objections as the country burns to the ground.  Until someone else comes along – given the country’s dire situation – I will continue to support Trump.  He’s an axe in America’s tool kit that we set aside for emergencies.

We’re in an emergency.