Will Alexander
|
Posted: Apr 06, 2017 9:43 AM
Share   Tweet
The opinions expressed by columnists are their own and do not necessarily represent the views of Townhall.com. 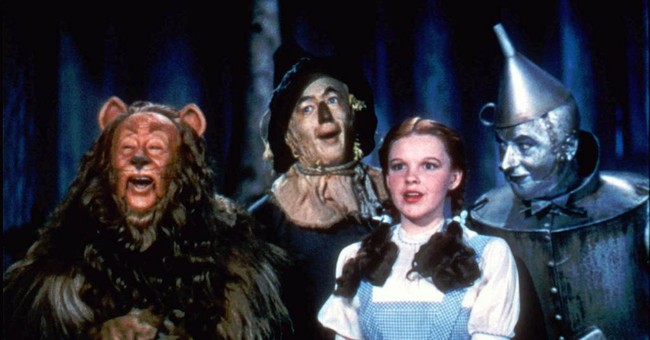 The “Home of the Free and the Land of the Brave” feels like the Land of Oz these days.  The big difference? We’re not dreaming.  We are swamped with lost leaders on a Yellow Brick Road of political correctness, who no longer have the heart, the brains or the courage to point the way home.

Minority party leaders, in their maniacal schemes to “resist” a duly-elected president, have reduced themselves to political Munchkins.  Representing the Lollipop Guild are the likes of Chuck Schumer, Nancy Pelosi and Maxine Waters whose sugary rants never come with real political teeth; it’s all just political play-play.  They put their little fingers in the political winds, then stick their tiny thumbs into their tiny belt loops, and kick out empty serenades promising all sorts of teeth-rotting sweet stuff:

When the political winds change, they change. That’s the Lollipop Guild.

Representing the Lullaby League are an army of haranguing pundits and biased news people who, like the Emerald City’s field of yellow poppies, put you to sleep with the same, old, tired, boring hyper-partisan blah, blah, blah.

The problem with all this is that when rabid partisans twist words, distort history, demonize opponents, and mangle the meaning of the laws to license lawlessness – all in the name of, “It’s just politics, folks” –  it creates a Wizard of Oz Effect: Political illusions that people think are real. Worse, real people in droves react to those illusions.

This is a big, big problem.

Just as the folks of Munchkin City believed that an all-powerful Wizard was real, too many people believe that the illusions manufactured by those behind the nation’s political curtains are real.  They push and pull at the levers of our legitimate institutions to contort or conjure up problems that don’t exist. Why? So they can pretend to solve problems that don’t exist.

How else can you possibly explain that, after electing a black man to Earth’s most influential office – twice – people still believe there’s debilitating racism in America; the kind worth our scarce time, resources and energy to keep fighting? The idea that racism is still hampering black progress in America is as pure an illusion as they come – Wizard of Oz stuff. The effect?  Poof! Race relations become far worse, and unsolvable.

Plato’s “Allegory of the Cave” hints at why this is so dangerous.  He supposed that there were a group of people, raised from birth inside a cave and chained in such a way that they can never turn their heads; so they only watch the wall in front of them. The mouth of the cave behind them is open so that a fire casts shadows of men moving around outside, and the echoes of these men reach the cave.

So all their lives, these people grow up believing that shadows are real men, and that echoes are the real voices of those shadows.

Today, a generation of Americans have been misled by the wizardry of political cavemen who concoct all sorts of political illusions that amount to shadows and echoes. Some have grown up all their adult lives listening to this stuff in universities, social echo chambers, and in the media.  They’re free to turn their heads, but they refuse to.

In a nation with bold solutions to just about everything, we can’t get the simplest things done in Washington because everything is contaminated by cheap politics. And the blame is not equal.  Liberal and Leftist bullies pick most of these fights.  They resort to the worst below-the-belt rhetorical terrorism possible to ram their patronizing agendas down everyone’s throats.

The problem with conservatives?  In a fight that’s becoming America’s Second Civil War, they’re too genteel.  They have less than a smidgeon of the fight of their rabid colleagues, who bounce around everywhere like wild Energizer Bunnies beating noisy drums and demanding the Moon.  Conservatives do hit back after a few unprovoked sucker punches, but never hard enough to knock the crazy out of these bullies so they cut the crap.  Committed to being “too good,” their civility becomes a reliable weapon wielded with devious skill by the bullies.

“Your goodness must have some edge to it – else it is none,” Emerson once wrote.

It’s going to take a lot of edge from good men and women to pull back the curtains on the screaming minority of little men and women who sit in their caves, pulling at our institutional levers.  Americans who know better are tired now; we’ve had enough of Oz.  If leaders don’t have the heart, brains and courage to steer clear of the Yellow Road – risking public crucifixion, character assassination, career suicide and the death of their reputations to fight for enduring civic truths – then others will be forced to do the job for them.