Wes Martin
|
Posted: Sep 07, 2021 10:12 AM
Share   Tweet
The opinions expressed by columnists are their own and do not necessarily represent the views of Townhall.com. 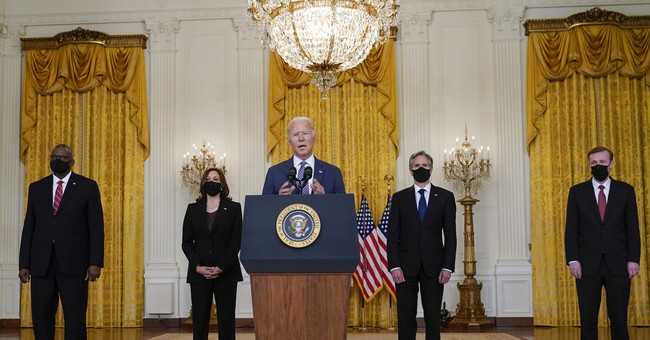 This past week, we have seen many press releases and statements from numerous politicians and senior military officers trying to gloss over their failures concerning the Afghanistan debacle.

Despite President Biden’s claim, Afghanistan is not the longest war for the U.S. military. The Army’s conflict with Native Americans lasted 50 years. The Cold War lasted 45 and involved hundreds of thousands of American service members stationed throughout the democracies of western Europe, blocking communist aggression. The 1952 Korean War armistice brought an end to major hostile activities, but neither a surrender document nor a peace treaty was ever completed. The two nations are still technically in a state of war, and 28,500 American service-members stationed are in South Korea help prevent the resurgence of combat operations.

The results of these long fights are that all frontier territories achieved statehood and the Soviet Union collapsed. South Korea is the tenth largest national economy and its armed forces work closely with the American military throughout the world.

Despite what today’s ruling politicians in Washington claim, the U.S.-led military coalition entered Afghanistan to bring an end to the nation-state sanctuary for terrorism and to neutralize Osama bin Laden. With bin Laden’s death, the remaining mission for U.S. and Coalition forces was to prevent Afghanistan from again become a breeding ground for terrorism.

President Biden struggles to justify his decision. The last week of August, he claimed he inherited a bad deal from former President Trump. Biden has reversed numerous Trump decisions and policies—the Keystone Pipeline and Paris Climate Agreement being but two. Now Biden claims the decision wasn’t sudden, but made months ago because of an election promise that he would pull American troops out of the country. Telling the truth only requires remembering one story.

Biden cites loss of American service members’ lives as a justification, including the 13 killed at Kabul airport. He ignores the fact that no service members died in the previous 18 months before this evacuation. He also disregards the fact that for as long as there has been a U.S. military presence in Afghanistan, not a single al-Qaeda terrorist attack occurred on American soil.

The disintegration of the host country’s military should not have caught Biden by surprise. As vice president, he witnessed the same occurrence when his boss pulled American troops out of Iraq. The Islamic State could not move fast enough to catch up with the fleeing Iraqi military.

Where were today’s generals and civilian service chiefs? Preparing for the 2003 invasion into Iraq, then-Secretary of the Army Tom White and former Army Chief of Staff Eric Shinseki, had the courage to state that then Secretary of Defense Rumsfeld’s intent of deploying with only 140,000 troops was wrong. Before Congress, then-Central Command’s General John Abizaid put an end to Rumsfeld’s claim that al-Qaeda was in “their final throes.” Former SecDef (and former General) James Mattis stood by his convictions that Trump’s sudden decision to pull American troops out of Kurdistan was wrong.

Not one of today’s generals or service chiefs have come forward and admitted pulling out of Afghanistan in the way it was done was wrong. None have declared opposition to Biden’s decision before it was executed.

There also remains no noticeable senior military opposition to Biden’s claim that future terrorist organizations within Afghanistan will be dealt with by long range missiles and high-tech ordnance. Complete suppression of terrorism organizations requires ground engagement. The generals have obviously not given the message to Biden.

What the Biden administration cannot dispute is that the U.S. government left behind a massive arsenal of weapons systems, ordnance, and firearms with the Afghan military. All that equipment is now in the hands of the Taliban and soon to be with their al-Qaeda allies.

The aircraft, tanks, and other complex vehicles will not be a factor within six months. America has the finest equipment in the world. It also has the best maintenance sergeants and equipment readiness programs. All those complex weapons systems in Afghanistan will soon turn to expensive steel rocks, as already proven in Iraq. What cannot be ruled out is Russia and China receiving captured high-tech equipment for analysis and vulnerability testing.

The long-term international terrorism problem will be the low-maintenance weapons which will end up being transported throughout the Middle East and beyond. Hopefully, there were no surface-to-air missile systems left behind.

The question is when al Qaeda becomes fully reconstituted and again uses Afghanistan as a platform from which to launch terrorist attacks, what is America’s option? Even if America has no choice but to return, domestic support will not exist. Taliban forces are now searching for and executing former supporters of the American and Afghan governments.

This brings us to one more gigantic failure produced by the withdrawal. The unspoken mission accepted by American and Coalition forces members was to free the people of Afghanistan from horror, not bring more upon them. The intensifying bloodbath has destroyed that goal as well.