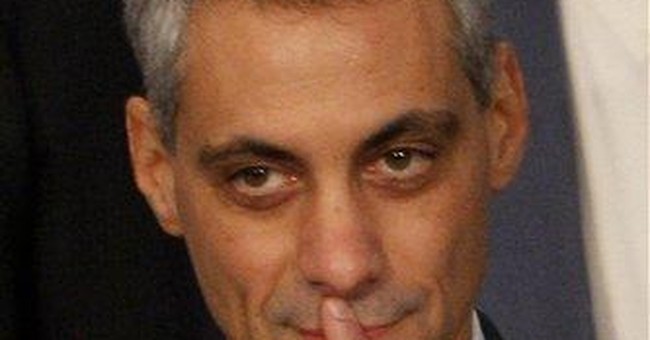 You wanna know how to get Capone? They pull a knife, you pull a gun. He sends one of yours to the hospital, you send one of his to the morgue. That's the Chicago way! And that's how you get Capone. Now do you want to do that? -Jim Malone (Sean Connery), “The Untouchables”

President Obama is certainly taking Jim Malone’s advice when it comes to his spending programs. John Kyl (R-Arizona) has rightfully acknowledged that the stimulus plan is not stimulating the economy. Nor, should we have expected that it would have. The $787 billion stimulus bill was a pork-laden spend-fest with more than half of the spending not even occurring for 2 years. Even for those analysts that believe government spending is stimulative (it is not) spending billions of dollars in 2011 surely cannot increase economic growth in 2009. In fact, it creates real and significant economic damage.

However, the crime of opposing the administration’s stimulus program (metaphorically pulling a knife against the administration) apparently has costs. The “gun” the Obama Administration has pulled is a thinly veiled threat against Governor Brewer of Arizona.

As far as weapons go, the IRS is the most powerful weapon of all – a lesson Al Capone learned too late. According to the administration, if Arizonans agrees with Senator Kyl that the stimulus bill is not stimulating their economy, the Obama Administration would happily have the millions of dollars the state is receiving this year in stimulus funds sent back to the IRS.

It is troubling to see the administration threatening the viability of our federalist system. The Arizona example shows that if a state or its representative offends or disagrees with the administration, then the offenders, and all of the offender’s associates, risk the beneficence of the Obama Administration. And the Senator Kyl case is not unique. The Obama administration has also threatened California Governor Arnold Schwarzenegger with lost stimulus funds if he went through with proposed spending cuts that were desperately needed but would have hurt a favored Obama constituency – labor unions. Eric Cantor (R-VA) has also been criticizing the stimulus package and has caught the attention of the president’s Chief of Staff Rahm Emanuel – a thinly veiled threat may now be on its way to Richmond Virginia as well.

Equally troubling is the administration’s view that taxpayer dollars belong to them. The money sent to Washington D.C. does not belong to the president, Congress or any government constituency. The money sent to Washington D.C. belongs to the taxpayers. As for the taxpayers of Arizona, the Tax Foundation estimates that, on average, every man, woman and child in Arizona sent nearly $6,100 to the federal government in tax payments in 2005.

This same principle holds for stimulus money. Stimulus money is not magically created in Washington D.C. All government funds must first be taxed or borrowed from citizens across the country before it can be spent. Therefore, when the Obama Administration threatens Arizonans that the administration can take back stimulus dollars if they agree with Senator Kyl, what the administration is really saying is that unless your actions (or the actions of your duly elected representatives) meet our approval, we will not send back the appropriate share of the money that we have already taken from you in the first place.

Acknowledging that all government dollars are actually taxpayer dollars, the correct inquiry (threat?) from the administration to Arizona should have been: If Arizona believes that the stimulus bill is not stimulating the economy we can change the current deal. This new deal would exclude the citizens of Arizona from receiving any federal money from the stimulus package. In return, the citizens of Arizona would no longer bear any of the responsibility to pay for the stimulus program – whether those costs are borne through the higher taxes or higher deficits that by definition must accompany this massive increase in government spending.

While still an uncalled-for threat by the administration, at least such a threat would have acknowledged that ultimately it is the citizens of the United States that pay the government’s bills.

It would also help our recovery if the administration acknowledged that it is the citizens of the United States that create our economic welfare and growth, not the politicians and bureaucrats in Washington D.C. The U.S. economy will not return to health under duress. The Chicago Way might be effective at catching Al Capone. It is counterproductive when it comes to creating a vibrant fast growing economy.