Wayne Allyn Root
|
Posted: Aug 29, 2021 12:01 AM
Share   Tweet
The opinions expressed by columnists are their own and do not necessarily represent the views of Townhall.com. 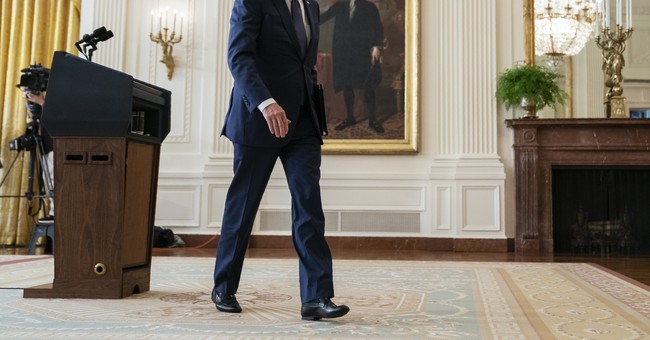 The tragedy and catastrophe that just happened in Afghanistan is more proof positive of my contention -- President Joe Biden, his family and his Democrat puppet handlers are China-owned. They are doing China's bidding.

The Biden crime family is owned lock, stock and barrel by China and the Chinese Communist Party. Biden's stolen presidency is the best thing to ever happen to China.

I don't need to remind all of you of what just happened in Afghanistan. Everyone saw it. The question is, can you believe your own eyes? How could this happen? This is the worst debacle in U.S. foreign policy history. And it threatens to become the worst catastrophic failure in U.S. military history. Why? Because it was all foreseeable and preventable.

If only Biden and the Democrats were as good at foreign policy as they are at rigging and stealing elections. We'd be ruling the world, not taking orders from the Taliban.

But all those American GIs dead and wounded (and all their devastated parents) don't even represent the worst-case scenario. Biden is leaving Americans behind to fend for themselves. There is no way out. How many will be murdered? How many will be tortured and raped and starved? How many will be held hostage for a billion-dollar ransom? This is like shooting fish in a barrel. This is potentially the greatest public-relations scenario ever for the Islamic State group.

I've warned for many months now that Biden is the most corrupt president in history. I believe he and his family are owned lock, stock and barrel by the Chinese Communist Party.

Everything Biden has done, every action, every statement and every policy since his inauguration has weakened America and enriched China. None of this can be a mistake or coincidence. Biden and his puppet handlers are beholden to China.

Let's examine the "mistakes" of Afghanistan. A picture emerges. These aren't mistakes.

First up, who evacuates the military first, leaving thousands of American citizens unprotected from bloodthirsty savages? Everyone knows you evacuate the citizens first, then the equipment and lastly the military. No one could be stupid enough to send the military home first. This was no mistake. This is TREASON.

Second, who leaves $85 billion of military equipment on the ground? Overnight, we just made the Taliban the 26th most powerful military in the world -- with your taxpayer money. Who does that? No one is this stupid. This was no mistake. This is TREASON.

Third, who puts the Taliban in full charge of security for American citizens? This is pure insanity. That would be like putting the Gestapo or SS in charge of getting Jews safely out of Germany. No one could be that naive. This was no mistake. This was TREASON.

Everyone involved in this decision should be arrested or court-martialed. Tragically, our Obama- and Biden-appointed military leaders are too focused on COVID-19 vaccines for an illness with a 99.7% survival rate; critical race theory; climate change; purging all white conservatives from the military; and paying for sex reassignment surgeries.

Biden trusted the Taliban to protect our soldiers and citizens? Aren't they the enemy? Aren't they radical Islamic terrorists? Don't they execute people in the street? Don't they steal little girls to rape, enslave and marry? Wasn't all of Afghanistan running for their lives a few days ago from the vicious, bloodthirsty Taliban? But Biden made them our partners?

But wait, it gets worse. Biden gave the names of our citizens and Afghan allies to the Taliban to allow them through the gates of the Kabul airport. That's a "Kill List" for the Islamic State group to hunt down all our people. The U.S. government has officially named the Taliban "terrorists." And Biden is handing the names of our citizens to terrorists? This is no mistake. This is TREASON.

What president would even consider leaving Americans behind to be murdered or held hostage for ransom? This is no mistake. This is TREASON.

Who spends 20 years, trillions of taxpayer dollars and American lives and limbs, then just runs away so China can waltz right in and take possession of all the lithium and rare-earth minerals? No one is this dumb. This is no mistake. This is TREASON.

Every action Biden takes weakens America and enriches China: The open border and shipping COVID-19-infected refugees all over our country; vaccine mandates; the budget-busting green infrastructure deal; killing our energy industry; and paying millions of Americans to not work. Now disaster in Afghanistan. Biden is destroying America and helping China become the dominant force in the world.

These aren't mistakes. This is TREASON.