Wayne Allyn Root
|
Posted: Jun 16, 2018 12:01 AM
Share   Tweet
The opinions expressed by columnists are their own and do not necessarily represent the views of Townhall.com. 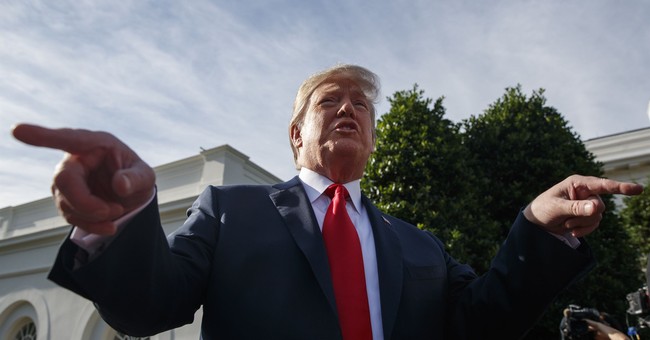 Trump concluded his torture experiment in the wee hours of Tuesday morning. That’s when he walked away from a meeting with dictator Kim Jung un of North Korea with the most astounding victory of all time. Kim apparently agreed to immediate and complete de-nuclearization.

Trump accomplished something no liberal critic or “Never Trumper” ever thought possible. Trump has completely tamed Kim and his nuclear ambitions. Trump has neutralized one of worst threats hanging over the world. Trump has delivered “peace in our time.”

And, as I predicted a month ago, Trump just earned the Nobel Peace Prize.

To liberals this must feel like torture. Trump keeps attacking and conquering in waves. And each time he makes liberals look sillier, stupider and crazier than the last.

Take Robert DeNiro, the famed actor who plays tough guys in the movies. Trump has clearly driven him insane. DeNiro now suffers from delusion. DeNiro thinks he’s a mafia thug. He can no longer tell fiction from reality. On Sunday, he stepped onto the stage at the Tony Awards and did his best mafia thug impression. DeNiro said, “F—k Trump. It’s no longer down with Trump, it’s f—k Trump.” Classy. Tony Soprano could not have said it better, while wearing brass knuckles.

On the same weekend, Bill Maher on his HBO show “Real Time” admitted the economy is booming. Then he reported his dream: Maher is rooting for an economic crash. Maher said, “I’m hoping for it. I think one way you get rid of Trump is by crashing the economy. So please, bring on the recession. Sorry if that hurts people, but it’s either root for a recession, or lose your democracy.”

This is what the Democrat Party has been reduced to by Trump's relentless torture. Democrats support MS-13. They don’t think jobs matter to middle class Americans. $1000 bonuses are insignificant “crumbs.” The lowest unemployment ever for blacks and Hispanics is meaningless. Skyrocketing GDP is unimportant. Open borders are good. Defeating ISIS is bad. Peace with North Korea is unacceptable.

Their slogan should be: "MAMA: Making America Miserable Again."

Now for some deep-down truth from a longtime dear friend of mine. He’s a 71 year old, liberal, Jewish New Yorker who hated Bush, and hated Trump more. For three years now he’s called Trump every foul name in the book. But Trump's North Korea breakthrough was the last straw. He’s capitulated. He’s crying “Uncle.” Trump has conquered him. Here are his words in an email to me earlier this week after Trump's apparent victory in Singapore:

Hat's off to The President. You were right. This is the new America and it's going to be around for a while.

Forget about the mid-terms that are now over. No way Dems get House, much less Senate. And who's going to run against Trump in '20? They don't even need to bother holding the election.

While I can't stand ignorant hypocrites like Evangelicals and Tea Party flip-floppers who gave "The 1%" a trillion-dollar gift and called it a tax cut -- you can't argue with success and Trump's getting it done.

That’s called raw truth. They won't admit it publicly, but this is what liberals like Bill Maher and Robert DeNiro are really thinking, deep-down. This is why they are so bitter, cranky and delusional.

It’s all over. Turn off the lights. The party is over for the Democrat Party.

Trump proves, once and for all, torture works.