Exposing the Bums and Frauds of the GOP

Wayne Allyn Root
|
Posted: Jul 10, 2017 12:01 AM
Share   Tweet
The opinions expressed by columnists are their own and do not necessarily represent the views of Townhall.com. 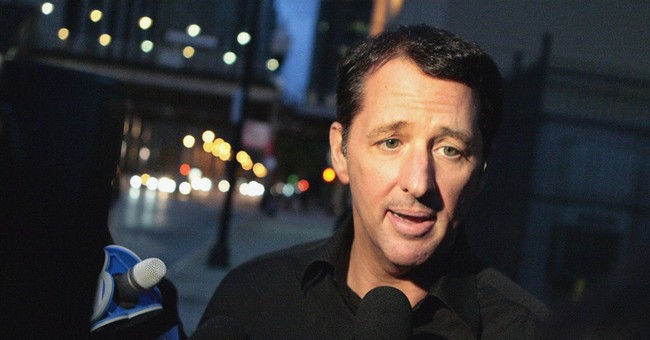 Start thinking of the answer to this important question as you read this column.

And our own Nevada GOP Governor Brian Sandoval (who was the first GOP Governor to embrace the expansion of Medicaid under Obamacare) now says repealing and replacing Obamacare would harm the Nevada economy.

Can you imagine GOP politicians defending a world class Bernie Madoff-like fraud that fleeces their own loyal base of middle class voters and small business? Amazing. Even more remarkable- these are Republican leaders fighting desperately to keep the fraud in place.

Why? What's in it for them?

If this is proven as fraud- perhaps the most expensive fraud and scam ever perpetrated in world history- doesn’t that make them co-conspirators in the fraud?

So, let’s compare the crimes committed by Obama and the architects of Obamacare to the scam pulled off by convicted private sector conman Kevin Trudeau. This comparison is a real eye-opener!

Remember TV infomercial pitchman Kevin Trudeau? Anyone who watched late night TV knows him. His 30-minute infomercials ran day and night on cable TV channels for the past decade. The government claimed that his product (a book about losing weight) was a fraud. The result? Kevin Trudeau was convicted and sentenced to 10 years in federal prison in February 2014.

Now Trudeau is no saint. According to the government, he scammed about a million people out of $30 each. But did losing $30 effect anyone’s life? No. Were they forced to buy at government gunpoint, or IRS penalty? No. Yet Trudeau got 10 years in prison. For a book.

But Obama used Obamacare to scam every middle class American out of thousands of dollars. In my case, my health insurance went from $500 per month to $2000 per month. And because the deductible and co-pays rose so dramatically, it now covers nothing. So my bill actually went up about $2000 per month.

That means Obama's lies scammed me out of $25,000 per year. That's $250,000 per decade. That's about $1 million over my lifetime. With increases and interest, maybe $2 million. All sold with lies and misrepresentation.

Think about it. Obama promised rates would go down. Instead average healthcare premiums for Americans skyrocketed. Isn't that consumer fraud?

Obama's lawyers argued in front of the Supreme Court that Obamacare wasn't a tax. Yet the entire Obamacare is based on billions of dollars of taxes. Obamacare is nothing but taxes. The biggest tax increase in U.S. history. And the most taxes in one bill in history. Isn't that consumer fraud?

The government accused Trudeau of lying and exaggerating to sell his weight loss book. Their argument is that he called weight loss “easy” on TV. The government argued without the lies he couldn’t have sold the book. But isn’t that exactly how Obama sold his massive Obamacare fraud? Obama promoted how easy and simple and inexpensive Obamacare would be. Isn't that consumer fraud?

Here’s the biggest whopper of all: “If you like your insurance you can keep it.” Obama told this lie while his own internal White House reports showed that up to 93 million Americans would lose their insurance because of Obamacare.

Obama told the middle class a massive lie to sell his product, because he knew if he told the truth, no one would buy. The result? Millions of middle class Americans lost their health insurance.

How does that differ from Kevin Trudeau?

But it gets worse! Trudeau’s misrepresentations didn’t cost a single person their health, or their life. There are thousands of stories of cancer patients losing their insurance coverage, or doctors, or hospitals, or the lifesaving medicine they need because of Obamacare.

How about Linda Rolain, a Las Vegas woman, who lost her battle to brain cancer in 2014 after a 3-month delay due to the faulty design of the Nevada Obamacare exchange.

There will be many more deaths from Obamacare. Don’t believe me? Ask the veterans who died in the VA scandal. Isn’t that government-run healthcare? Weren’t those “Death Panels?”

Every day Nevadans call my radio and TV shows to report they lost their insurance because of the high cost of Obamacare. If they die, or go bankrupt, aren't Obama's lies and misrepresentations to blame?

Or the $5 billion of taxpayer money wasted to build defective web sites.

This fraud makes Bernie Madoff look like small potatoes. Obamacare is the centerpiece of a purposeful plan to bankrupt the middle class. To fleece us. To redistribute our income. To make us all wards of the state and welfare queens.

If Kevin Trudeau deserves ten years in prison (and I don’t doubt he does), shouldn’t Obama receive a life sentence for the fraud he’s committed?

But what’s even more remarkable (and painful) is the realization that the two highest elected Republicans in the state of Nevada want to defend this world class Bernie Madoff-like fraud. They are fighting desperately to keep the fraud in place. And so are many other Republican politicians across this country. Why would Republicans be willing to defend this massive fraud? Why would they be willing co-conspirators?

The real question is "What’s in it for them?”