Wayne Allyn Root
|
Posted: Oct 10, 2016 11:43 AM
Share   Tweet
The opinions expressed by columnists are their own and do not necessarily represent the views of Townhall.com. 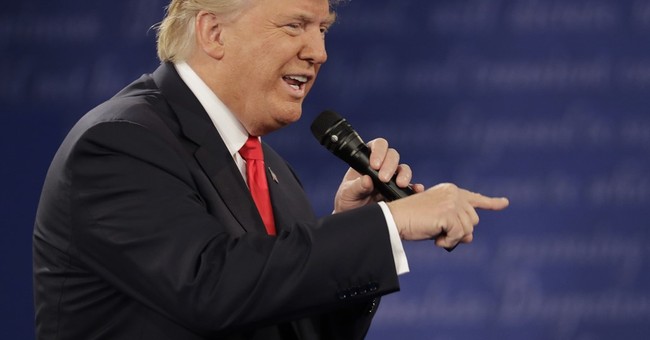 Did you watch the media over the weekend? They were gloating. They thought the race was over. They thought Trump was finished. Finito. History.

Did you listen to the political experts? They too were burying Trump.

Did you watch the career politicians? Even Republican politicians raced away from Trump. They were like rats deserting a sinking Trump ship.

Did you hear the many calls for Trump to resign over his comments in a secretly recorded video from 11 years ago?

And then there were the phone calls. I fielded dozens of gloating calls from my liberal friends- they all believed Trump was finished. They taunted me. They were congratulating their candidate Hillary as if she had already won.

All of Trump’s critics and doubters were practicing what I call “Premature Prognostication.”

Football fans do it all the time. My friends call to congratulate me when my team is leading by 14 points in the 4th quarter. Kiss that lead goodbye. That team loses every time. Making that premature phone call and gloating too soon is a curse upon your team. It’s “the kiss of death.”

Well don’t look now, but liberals just did it to Hillary. They cursed her. They crowned her champion before the game was over. They need to see their doctors immediately. They need a pill for premature prognostication.

Anyone who counted Donald Trump out, simply doesn’t know Trump. Sunday night they got a lesson. To put it simply, Trump owned the debate. He was in command. He was in rare form. He crushed it.

Trump has nine lives. He’s like Freddie Kruger in “Nightmare on Elm Street.” You can’t kill him (I mean politically, of course). You can’t stop him, or slow him, or beat him down. He just keeps popping back up. Trump is relentless!

Anyone who thought Trump was finished, or would step down, disregarded the one rule all of us who know Trump understand...

Trump didn't step down. Trump DOUBLED DOWN. That's because Trump understands that his "ace in the hole" is- not the establishment GOP, or GOP leaders. They don't matter to Trump. What matters to Trump are the people. As long as the people stay loyal, Trump is golden.

Trump lost none of his loyal base. The latest poll after the infamous tape (By POLITICO/Morning Consult) showed Trump didn’t lose any of his base.

That news gave Trump confidence heading into his big debate on Sunday night. Trump was “the comeback kid.” He was strong, confident, high-energy, credible, prepared, colorful, and on the offensive most of the night against Hillary and the moderators. He even pulled a page from Ronald Reagan- Trump was funny.

What people remember from these debates is who was in control, who looked confident, who had one or two memorable lines. Trump won on all three counts.

When Hillary said she was glad people like Trump don’t run the country, Trump’s response was the line of the night: “That’s because you’d be in prison.”

When Hillary tried to compare herself to Abe Lincoln to explain why she has both a public and private answer to each question, Trump subtly made the point that Hillary is no “Honest Abe.”

Trump’s promise to appoint a special prosecutor to investigate Hillary if he’s elected president was the memorable moment of the night.

Most importantly, Trump made the point throughout the night that we cannot trust Hillary’s judgement. Trump made it clear whether it be Obamacare, or jobs, or foreign policy, Hillary always talks big, but does nothing…and when she actually does something, she makes all the wrong decisions (See Libya, Syria, the Arab Spring).

Trump was counted out by everyone it seemed- but me. Because I know Donald Trump. He is the guy you always bat in the cleanup position. He’s always best under pressure. He always shines at the important moments in life. He hits homeruns when they are most needed- with the bases loaded in the bottom of the 9th inning.

In conclusion, we learned three things on Sunday night:

Trump understands the importance of “the moment.” Trump was mediocre in the first debate. But he crushed it in the second debate, when he needed it most. I'm betting his best performance yet will come in the third debate in my hometown, Las Vegas. Because Vegas is where all showmen come to shine!

That’s why I believe Donald J. Trump will be the next president of the United States.