Wayne Allyn Root
|
Posted: Mar 04, 2016 12:01 AM
Share   Tweet
The opinions expressed by columnists are their own and do not necessarily represent the views of Townhall.com. 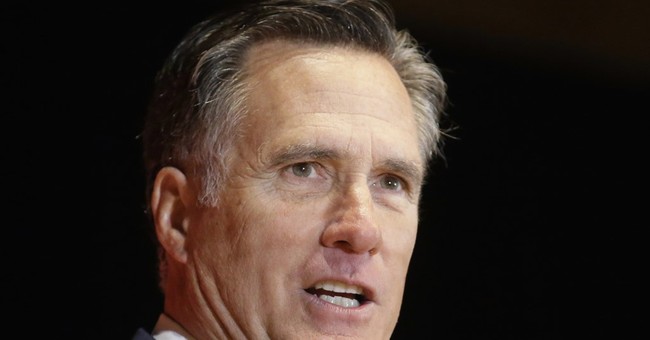 He's clearly angry that Donald Trump is standing exactly where he'd like to be- as the almost-certain 2016 GOP Presidential nominee.

He clearly jealous and embarrassed that Trump is expanding the GOP tent to include millions of working class and union voters. The exact kind of people that snubbed Mitt when he ran for president.

If only poor pathetic, low-energy Mitt would have reserved some of this anger, outrage and vitriol for Obama...if only he had called Obama a "phony" and "fraud"...Mitt would be running for his second term as president of the United States right now. Where was the outrage and anger then?

But it’s more than that. It’s much deeper. It’s time to stop kidding ourselves. Mitt Romney just made it clear. This is war. The entire leadership of the GOP needs to be purged. This isn't their party anymore. It's Trump's party. It belongs to Trump's voters- the peasants with the pitchforks are coming over the wall. Donald Trump has finished what the Tea Party started back in 2009.

Let Mitt, Jeb, Bloomberg, McConnell, McCain and Rubio go start a third party for wishy-washy moderate losers who believe in slightly smaller government than the Democrats…and giving all the power to globalists, the United Nations, lawyers, lobbyists, government bureaucrats, billionaires and multi-national corporations. Let’s see how far they get with that message.

Mitt and Marco and the whole crowd of establishment hacks violated that famous saying, "Never let 'em see you sweat." They took Trump's bait. What a mistake. If all of you had left Trump alone maybe he could have been stopped. But you chose to feed the monster. You tipped the peasants with the pitchforks off as to how important Trump is. Your anger and hysteria gave the secret away.

Trump is now a cross between Superman, Batman and Popeye. Trump is a legend. A true American hero. It was the vitriolic reaction of Mitt, Marco, Jeb, Mitch McConnell. Bloomberg, and the billionaire donor class that handed Trump his victory. Now there is no stopping him.

Trump will now finish what the Tea Party started- a hostile takeover of the GOP from within.

Trump has exposed the GOP establishment as no different than the Democrat establishment. As one of my best friends put it just yesterday, “If any of them were real Republicans they’d be using their shock, outrage and vitriol to attack Obama and Hillary and Bernie every second of every day. They’d be condemning the Democrats over this horrible economy. We’re all drowning. Instead Republican leaders are in panic over Trump? Are you kidding me?”

Folks the U.S. economy is in freefall. It’s on the verge of total collapse. The middle class has been gutted like a fish. Obamacare has bankrupted the nation. Health insurance costs are wiping out the budgets of every middle class and working class household in America. That’s why record low gas prices have done nothing for the U.S. economy.

There are no middle class jobs. We are being told unemployment is low at the same time food stamp use is near record highs. Do you think we're that stupid? Obama has created an entire economy for illegal aliens- the only jobs created are for cleaning toilets, mowing lawns, washing dishes, or serving drinks at a bar. Manufacturing has been destroyed- down for 15 months in a row- decent high-paying jobs have left the country. The border is wide open and illegals and terrorists are coming across in record numbers. We have $19 trillion in debt- the most in world history.

In response to this decay and decline of America under Obama, GOP establishment leaders like Paul Ryan have chosen to help Obama pass the Trans Pacific Partnership…refuse to put up a fight against Obama’s executive order legalizing millions of illegal aliens…pass bloated trillion dollar spending bills that add dramatically to the deficit and national debt…and pass funding to bring 300,000 new Muslim immigrants into the USA.

The GOP’s leadership isn’t in panic over what’s happened to the economy…or the border…or American jobs…or the middle class…or their last two losing presidential elections led by establishment candidates who stood for nothing?Instead they are in panic over Donald Trump…a commonsense Republican businessman who has brought millions of new voters to the GOP…who has incited passion, intensity, enthusiasm and record turnouts into the GOP race…who has brought working class Americans to the GOP for the first time…who has brought people who quit voting, or voted Democrat in the past two elections back to the GOP. Trump has brought union members to the GOP. People who felt abandoned and hopeless are for the first time in their lives excited about voting for a GOP candidate. Polling indicates Trump could be the first Republican since Reagan to win New York state.

Thank God for Trump. Trump is brilliant. He is a third party candidate from within the GOP. He is carrying out an internal hostile takeover of the rat-infested, corrupt, greedy, soul-less GOP.  “Business as usual” is out. The gravy train is over.

It’s OUR party now. Trump has given the GOP back to the people.

We should all thank Mitt Romney for the assist.