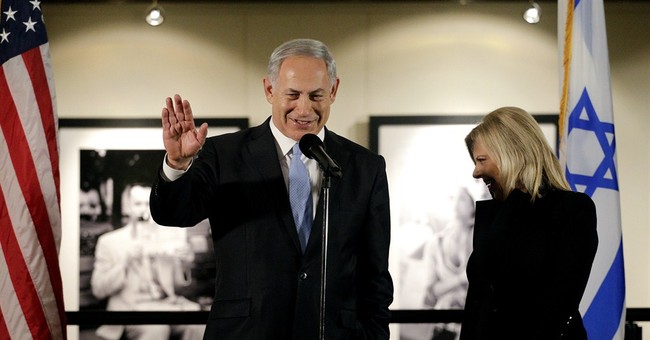 Wasn't that refreshing? Don't you wish we had Benjamin Netanyahu as president, instead of Obama? I took a sampling among my friends- all smart, educated business owners. Men of substance. Every one of them said if they had a choice, they'd choose Bibi over Obama for president…of the United States.

The media will concentrate on the substance of Israeli Prime Minister Benjamin (Bibi) Netanyahu's speech. But let's first look at the style. I am a business and motivational speaker who speaks all over the globe, often to audiences in the thousands. I understand communication, charisma, chutzpah and salesmanship. Bibi gets an A+ in all four categories. He delivered the speech of a lifetime.

Americans and the world just got a lesson in CHUTZPAH. That’s the Jewish word for "balls." No one else in the world could have pulled off what Bibi just did. Talk about a masterful speech. He walked into a joint session of the U.S. Congress like he owned it. Like he was the President of the United States. He received 29 standing ovations. If you just dropped in from another planet, you might have assumed you were watching U.S. President Netanyahu give his State of the Union.

Keep in mind Bibi is the leader of a tiny nation with the population of some anonymous, obscure African nation. Yet he held court over the U.S. Congress for almost an hour like he was the most powerful man in the world. Like he was the leader of America, Russia, China, UK or Germany. That takes chutzpah.

Can you imagine the look on the faces of Obama, Michelle and Valerie Jarrett. I'd have paid a million dollars to be a fly on that wall!

Can you imagine the looks on the faces of the leaders of every Muslim nation on earth? The anger, shock, jealousy. Why Bibi? Why is he presiding over the U.S. Congress? Why are they fawning over his every word? Oh to be a fly on the wall of the leaders of Iran or Qatar or Afghanistan.

How about the looks on the faces of the leaders of ISIS. Can't you picture them saying, "Israel's leader gets the attention of the world by addressing a joint session of Congress…we have to set fire to prisoners in cages to get anyone's attention!"

And that vibe. Bibi gave off the vibe that he alone holds the key to saving the world. And just maybe…he does.

Now to the substance of Bibi's speech. Bibi walked onto the biggest stage in America and embarrassed Obama. He schooled him. He took him to the woodshed. And here’s the masterful part- he killed him with kindness! Bibi pulled off a speech ripping America’s president to shreds, in front of the political leadership of America…in front of Harry Reid and Nancy Pelosi…in front of the American people…and he did like only a master of communication, chutzpah and salesmanship could- by first praising him. By thanking Obama. By showering him with compliments. Then he proceeded to strip him naked and pummel him into submission.

That the only deal worth doing punishes Iran and takes away their nuclear capabilities until they change their behavior…until they stop supporting and funding terrorism…until they stop vowing to annihilate their neighbor Israel and kill all the Jewish people…until they check their aggressive support of militant, radical Islam all over the world. That to allow any nuclear capability for a militant Muslim nation is suicide for the entire world.

Do you understand the chutzpah of Bibi. The leader of tiny Israel was giving Obama lessons in negotiation. This was more entertaining to conservatives like me than watching "American Sniper." I asked my family to pass the popcorn.

#1) The art of negotiating. Bibi compared negotiating with Iran to negotiating at a Persian bazaar. Hilarious, and so true. “If they threaten to walk away, let them.” Bibi said. “Because they’ll be back.” It takes an Israeli to understand the human nature of Persians. That threat of walking away is just part of a negotiation. Bibi understands that.

Can Obama be that stupid? Bibi sure made him seem that stupid. But I know Bibi knows what I know. He just can’t say it in public. Obama is not stupid. He knows exactly what he’s doing. He’s not on Israel’s side. So Bibi had to play a masterful game of chess with Obama. So he painted him as naïve and stupid. He embarrassed him in front of the world. He made it clear the deal Obama has negotiated is Neville Chamberlain all over again. It’s a repeat of the worst deal ever agreed to- Chamberlain’s deal with Hitler.

Bibi pointed out that Iran is a rogue terrorist state no different than ISIS. Iran is the enemy of ISIS, so Bibi had to make a very interesting point. Iran and ISIS are the same people. They want the same thing. They say it. They tweet it. Iran wrote it in their constitution. They are dedicated to killing, conquering, converting and enslavng first the entire region, then the world. Iran is only fighting ISIS to determine who gets to do it in the name of Allah. Bibi then drove the nail home, “The enemy of your enemy…is your enemy.” Great line! I hope Obama was wearing a cup. If not, he may be down for a while.

#3) Thirdly, Bibi made a simple clear point that the American people can understand. Forget intellectual arguments. Forget the fancy words of lawyers and Ivy Leaguers like Obama, meant to obscure, confuse, distract and deceive the people. Bibi spoke from the heart. He painted a picture of militant radical Muslims like ISIS and how they act- they cut off heads…they torture…they throw gays off buildings…they parade prisoners in cages…they set people on fire…they kill women and children…even babies are cut in half and mutilated at the hands of militant radical Muslims. And Obama wants to allow them to possess NUCLEAR WEAPONS? And he thinks that’s okay? He thinks they’ll change? He thinks they’ll stop being angry and aggressive with a nuclear weapon now in their hands?

No wonder Obama didn't show up at the speech. At this point the whole world could see our emperor has no clothes.

No one watching can forget Bibi's lesson: No militant Islamic state can ever be allowed to possess nuclear weapons…or they will certainly use them. No one in the world will be ever again sleep soundly. No one’s children will ever again be safe. Bibi made it clear Obama’s deal with Iran allows them to possess nuclear weapons. It’s only a matter of when. That cannot be allowed to pass.

I think I could hear Obama and Valerie Jarrett screaming at the TV set inside the White House "war room." Bibi embarrassed them. Thrashed them. Emasculated them. By the way, not only is it clear Obama does not like Israel…that Obama is a Muslim sympathizer…that Obama is trying to weaken Israel and put her people in danger…but the ruler of Obama’s White House is Valerie Jarrett. Where was Valerie born? Iran.

Obama’s actions and negotiations are no mistake…fluke…coincidence…not done out of naivete. Bibi knows that as well as I do. So he had to deconstruct this president and his Iranian-born svengali in a nice way…in front of the Congress…in Obama’s own house.

Bibi had to kill Obama with kindness. He could not win over the American people by ripping our president in our own home stadium. So he never once named Obama as the bad guy. He never once blamed Obama for a bad deal, or bad negotiations. He never said out loud “Your president is trying to hurt Israel.” But he didn’t have to. We all know.

Bravo Bibi. You just showed us all what a real leader looks like- someone who stands up to evil, instead of negotiating and compromising in the face of another Hitler. Bibi made his point subtly…as subtly as a jackhammer and blowtorch. Congrats Bibi, you made a lot of smart Americans wish you were our president instead of Obama.

And the bonus is…we all got a 2 for the price of 1. Bibi’s speech destroyed both Iran and Obama. A 2 for 1 sale on the floor of the U.S. Congress? It's kind of like a Persian bazaar.