Is the Democrat Party an Organized Criminal Enterprise? 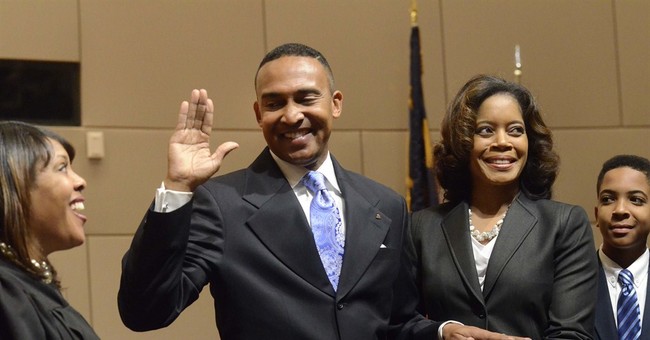 Democrat politicians are being arrested all over this country. We are experiencing a Democrat crime spree. You’d almost think the Democratic Party was a widespread organized criminal enterprise.

I have advice for the GOP in 2014 and 2016. We don’t need good candidates to defeat the Democrats…

Keep in mind Democrats are the ones always claiming to care about women, children, minorities and the poor. It turns out this is all a cover for “Show me the Money!” While they are busy painting Republicans as “mean spirited” “racist” “radical” and “extreme” for wanting to cut spending, reduce the debt and allow taxpayers to keep more of their own money, Democrats are busy being involved in bribery, fraud, theft, extortion and gun running. Al Capone and John Gotti would be proud of this scam.

Maybe their new slogan should be, "The Party That Makes Crime Pay!"

This week’s Democrat crime spree started with Charlotte Mayor Patrick Cannon. He resigned after being arrested by the FBI on corruption charges in a FBI sting operation.
http://www.foxcarolina.com/story/25080192/charlotte-mayor-patrick-cannon-arrested-by-fbi-on-federal-corruption-charges

The FBI charged that Democrat Mayor Cannon wanted far more than to help the poor in his city. He allegedly wanted to line his own pockets by demanding bribes from developers for the right to build in his town. He was charged with theft, bribery, fraud and extortion.

This should come as no surprise to Rhode Island citizens. Right next door in Massachusetts the last three speakers of the Massachusetts House were convicted of felonies. Would it surprise you to learn they were all Democrats? They were Democrat Salvatore DiMasi, Democrat Thomas Finneran and Democrat Charles Flaherty.
http://www.masslive.com/news/index.ssf/2011/07/a_tale_of_3_speakers_--_salvat.html

Yee was charged with wire fraud, conspiracy to deal firearms without a license and illegally importing firearms. Yee allegedly accepted $42,000 for introducing an arms buyer to an arms dealer. Investigators said Yee was helping the arms buyer obtain weapons such as shoulder-fired missiles, from a Muslim separatist group in the Philippines, in order to pay off campaign debts. WOW.

Keep in mind Yee was a big gun control advocate- meaning his goal was to take guns away from honest law-abiding citizens. Quite a scam- Democrat politicians disarm the citizens, leaving them helpless at the hands of heavily armed thugs- who then buy their illegal weapons from the Democrat politicians. I think Democrats have been watching too many re-runs of “Goodfellas.”

But Yee was only one of three Democrat Senators suspended that week from the State Senate in Sacramento.
http://hosted.ap.org/dynamic/stories/U/US_CALIFORNIA f_LEGISLATURE_CORRUPTION?SITE=AP&SECTION=HOME&TEMPLATE=DEFAULT&CTIME=2014-03-28-14-12-27

Democrat Attorney General Kathleen G. Kane claimed the investigation was “racist.” Funny, that’s the word Democrats always use when caught with stacks of money in their underwear as they walk out of an FBI sting.

Because all those allegedly accepting the bribes were members of the Pennsylvania Assembly’s Black Caucus, the Attorney General was able to claim “racism.” But sources familiar with the sting in Philadelphia say offers of bribes were made to both Republicans and Democrats, but only Democrats took the money.

Then just days ago it was disclosed that Democratic Nevada Senator Harry Reid gave $31,249 in campaign funds to his granddaughter Ryan Elizabeth Reid for “holiday gift expenditures.” Nice job if you can get it.
http://www.reviewjournal.com/news/disclosures-show-more-gift-purchase-payments-reid-s-campaign-fund-granddaughter

Reid claims there was nothing wrong with what he did. It's funny though that the recipient of the $31,000 in “gift expenditures” was listed on his Federal Elections Commission form as “Ryan Elizabeth.” Reid conveniently left off the last name “Reid” for his granddaughter.

I have news for our U.S. Senate Majority Leader. Using campaign funds for personal use (like enriching family members) is a crime. Ask Jesse Jackson Jr. You can reach him at The Federal Correctional Complex in Butner, North Carolina.

And in this story about Democrats and crime, I haven't even mentioned the IRS scandal, Benghazi, Fast & Furious, the AP scandal, the NSA scandal, or the biggest act of criminal fraud of all-time, "If you like your insurance, you can keep your insurance." Those are the really serious crimes committed by a Democrat in the White House.

He hasn't been arrested yet…but his time will come.