Walter E. Williams
|
Posted: Dec 06, 2017 12:01 AM
Share   Tweet
The opinions expressed by columnists are their own and do not necessarily represent the views of Townhall.com. 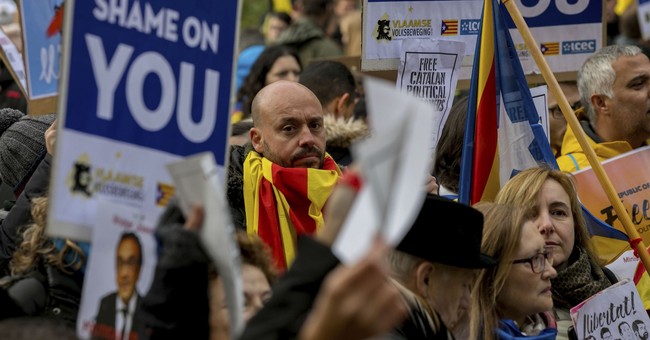 Officials in Catalonia, Spain's richest and most highly industrialized region, whose capital is Barcelona, recently held a referendum in which there was a 92 percent vote in favor of independence from Spain. The Spanish authorities opposed the referendum and claimed that independence is illegal. Catalans are not the only Europeans seeking independence. Some Bavarian people are demanding independence from Germany, while others demand greater autonomy. Germany's Federal Constitutional Court ruled: "In the Federal Republic of Germany ... states are not 'masters of the constitution.' ... Therefore, there is no room under the constitution for individual states to attempt to secede. This violates the constitutional order."

Germany has done in Bavaria what Spain and Italy, in its Veneto region, have done; it has upheld the integrity of state borders. There is an excellent article written by Joseph E. Fallon, a research associate at the UK Defence Forum, titled "The Catalan Referendum, regional pressures, the EU, and the 'Ghosts' of Eastern Europe." Fallon writes that by doing what it's doing in Bavaria, "Berlin is violating international law on national self-determination. It denies to Bavaria what it granted to the 19 states that seceded from Yugoslavia and the Soviet Union. In fact, Germany rushed to be first to recognize the independence of Slovenia and Croatia." It did that, according to Beverly Crawford, an expert on Europe at the University of California, Berkeley, "in open disregard of (a European Community) agreement to recognize the two states under EC conditionality requirements."

The secessionist movements in Spain, Germany, and Italy have encountered resistance and threats from the central governments, and in Catalonia's case, secessionist leaders have been jailed. The central governments of Spain, Germany, and Italy have resisted independence despite the fact that they are signatories to the International Covenant on Economic, Social and Cultural Rights, which holds that "all peoples have the right of self-determination. By virtue of that right they freely determine their political status and freely pursue their economic, social and cultural development."

Fallon notes the hypocrisy of Spain, Germany, and Italy, as well as the entire European Union. Back in 1991, the EC -- the precursor to the EU -- "issued its conditions for recognizing the unilateral declarations of independence by states seceding from Yugoslavia and the Soviet Union." Fallon argues that these same guidelines should be applied to the states of Catalonia, Bavaria, and Veneto. Isn't it double talk for members of the EU to condemn independence movements today, given that they welcomed and supported independence movements for states that were members of the communist bloc?

Catalonia, Bavaria, and Veneto are relatively prosperous jurisdictions in their countries. They feel that what they get from the central governments is not worth the taxes they pay. Each wants the central government off its back. They think they could be far more prosperous on their own. That should sound familiar. Some of the motivation for secessionist movements in Europe is similar to the motivation found in the Confederacy's independence movement of the early 1860s.

Throughout most of our nation's history, the only sources of federal revenue were excise taxes and tariffs. In the 1830s, the North used its power in Congress to push through massive tariffs to fund the government. During the 1850s, tariffs amounted to 90 percent of federal revenue. The Southern states were primarily producers of agricultural products, which they exported to Europe. In return, they imported manufactured goods. These tariffs fell much harder upon the export-dependent South than they did upon the more insular North. In 1859, Southern ports paid 75 percent of federal tariff revenue. However, the majority of the tariff revenue generated was spent on projects that benefited the North.

Tariffs being a contributing cause of the Civil War is hardly ever mentioned. Using the abolition of slavery as an excuse for a war that took the lives of 620,000 Americans confers greater moral standing for the Union.